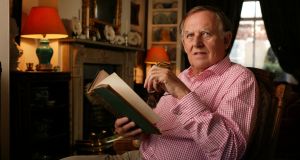 George Stacpoole: “I find research fascinating and try and try to pass on to customers as much information as I can find.” 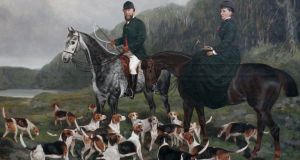 Richard and Alice Stacpoole by the Lake at Edenvale, Ennis with the Clare Harriers, by William Osborne RHA, 1823-1901.

What is your background?

I was brought up in Castleconnell, Co Limerick. I was sent to England to school and went to Wellington College in Berkshire. After leaving school in the late 1950s, I worked in the textiles business in Savile Row and was paid £8 per week. I had a great time discovering the antiques world in London. I subsequently realised London was not for me so I decided to learn to become a farmer/estate manager. I did a one-year course at the Royal Agriculture College at Cirencester. I also did my “National [military] Service” with the Royal Artillery Regiment and was sent overseas to what was then West Germany for two years.

On my return to Ireland I became a partner in the Estate Management and Supply Association.

We managed farms for various clients throughout Ireland. While working for it, I opened an antique shop and the whole thing progressed from there.

I opened my first shop at 35 Cecil Street, Limerick in 1964 and traded as Thomond Antiques. After a number of years I changed the name to George Stacpoole Antiques. I moved to the shop in Adare some 35 years ago and still trade from the same premises in the main street.

I trade in a very wide mix of things and have never really specialised in any one area or at any price level. I trade in items that I like and buy accordingly, hoping that my taste can tempt customers to buy. I have a big interest in anything of Irish origin and particularly enjoy dealing in porcelain, paintings and prints. I find research fascinating and try and try to pass on to customers as much information as I can find.

When I first started I was lucky to have some wonderful clients including John and Gertrude Hunt, whose collection – including some items they purchased from me – is now housed in Limerick’s Hunt Museum. Sybil Connolly, the Dublin fashion designer, was another regular and she was very kind and sent me customers, among them Jacqueline Kennedy when she came to Ireland with the children for a holiday in Co Waterford in 1967, a few years after the assassination of her husband President John F Kennedy. She was very charming and interested in everything; she spent about half an hour in the shop and bought a silver box. At a dinner that night with Lord and Lady Inchiquin, I suggested, flippantly, that Jackie might be a suitable Queen of Ireland. But Lady Inchiquin said, “Oh, but I’m the Queen of Ireland”.

Edna O’Brien came in one day and bought a piece of jewellery and I gave her – for her sons – a stamp album. Afterwards, in return, I received a wonderful letter and her most recent book, The Love Object, which had been banned.

The French actress Catherine Deneuve came and purchased a small piece of jewellery from me when she was staying at at Adare Manor. She rang me about half an hour hour later to say that when she opened the package there was nothing inside it. I credited her immediately and about 10 days later she rang from Paris to say it must have slipped out of the package into her suitcase unknown to her, so the transaction ended happily.

Two stars of Coronation Street, Mavis Wilton (Thelma Barlow) and Derek Wilton (Peter Baldwin), came into the shop one day and accidently a book fell from the upstairs, just missing Mavis. We had a lot of laughs as they said if it was more serious what publicity we would all have got!

People should pay much more attention to watercolours and prints, which are all very undervalued, especially those from the late 19th and early 20th century.

My own collection is very wide ranging, from china by the 18th/19th century James Donovan of Dublin to paintings and prints of Irish interest, particularly of Co Limerick and Co Clare interest. Friggers [pieces made for the personal amusement of the craftsmen] of glass pigs made in Bristol, circa 1800 were the first thing I started buying – aged 6 – for one shilling, which started me off collecting.

What is your favourite work of art and why?

Covid’s silver lining: How Ireland has fallen headlong in love with its pets
8