Evelyn Gleeson established the guild as a hive of traditional industry 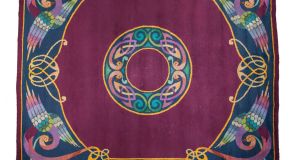 The names of so many Irish women designers are, if not lost, then largely forgotten and one such is Evelyn Gleeson. She established the Dun Emer Guild in 1902 in Dundrum in south Dublin as a hive of traditional industry. Inspired by the arts and crafts movement and linked to the then burgeoning Celtic revival, her enterprise produced a range of items such as linens, banners, church vestments and carpets using traditional skills including embroidery, weaving, tapestry and lace making.

She called the company Dun Emer after Cúchulainn’s wife who was said to be a skilled needle-woman. The handmade objects and the motifs used – often drawn from Celtic symbolism - were to emphasise a sense of Irish identity, chiming in with the literary work produced at the time. Her guild, where she was joined for a time by Lily and Elizabeth Yeats, had a stated mission: “Irish hands and Irish materials in the making of beautiful things” , and it also set about training young local women in the necessary skills, not only to give work but to prevent the skills dying out. The rugs are now highly collectible. This red one with Celtic border and knot design sold at Adam’s in Dublin in 2016 for €10,000, five times its lowest estimate.

Live beside the Edge in docklands penthouse for €1.7m
3

It’s time for summery food. Here are four easy dressings that work for every salad
5