A big score for this Tipperary hurler

Today is a good day for Sean Keating’s charcoal drawing of his own painting, ‘The Tipperary Hurler’, to go on auction in Dublin 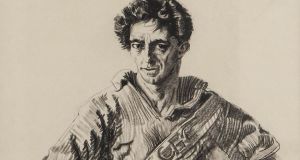 With the Kilkenny v Tipperary All-Ireland Hurling Final replay scheduled for this afternoon in Croke Park, the timing could hardly be better for the auction of a picture titled Study after The Tipperary Hurler. Adam’s art auction in Dublin on Wednesday evening includes a charcoal drawing by artist Sean Keating of his own famous painting of the same subject with an estimate of €3,000-€5,000.

The original oil painting, The Tipperary Hurler, was completed in 1928 and was exhibited at the Amsterdam Olympic Games (when art was still an Olympics discipline) and later in New York. It was donated to the Hugh Lane Gallery in 1957 by American collector Patric Farrell.

Keating made at least two drawings of the subject – apparently for purchasers who had admired the original painting. An inferior, less-complete drawing sold at Adam’s two years ago for €1,600. This drawing – probably made in 1930 in the US – was framed at David Bendann’s Fine Art Rooms, a gallery in Baltimore, Maryland.

The hurler depicted in both the original painting and Study after The Tipperary Hurler is wearing a jersey with the initials CHC – the Commercials Hurling Club, which was founded in 1886 by “men from the midlands who had moved to work in bars and shops in Dublin” and still exists today.

Research by art historian Dr Éimear O’Connor, the country’s leading expert on Sean Keating’s paintings, has established that the portrait is a composite image of two men: John-Joe Hayes, a 1920s Tipperary hurler, and model Ben O’Hickey, a native of Bansha who was a student at the Dublin Metropolitan School of Art.

Dr O’Connor has previously described The Tipperary Hurler as “a virile, strong, independent sportsman who symbolised the new Irish male in the new Free State”.