Early plant hunters could lose their heads over a pretty flower

Intrepid collectors died of disease, were eaten by wild animals or beheaded by local tribes 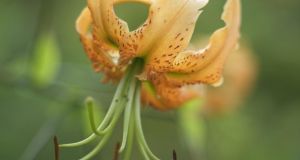 Today’s modern plant hunters (see main article) would be the first to admit that they have it easy in comparison to their historical predecessors. For example, their chances of encountering head-hunting aboriginal tribes, as the famous English plant collector ‘Chinese’ Wilson did in 1918 in the tropical rainforests of Taiwan, are relatively slim.

According to Wilson’s handwritten account, the Taiwanese aborigines used their gruesome talismans to decorate their huts, with the acquisition of human skulls through ritual beheading being a male rite of passage . “No young savage was allowed to wed until he had brought home one skull.”

His encounters with headhunting aborigines aside, the intrepid Wilson – who is famous for introducing thousands of Asian plant species into cultivation – suffered various other mishaps and injuries during his plant-hunting expeditions. Searching for bulbs of the regal lily (Lilium regale) in the Min Valley in China, for example, he was swept to the ground by an avalanche of rocks, thereafter walking with what he referred to as ‘my lily limp’.

At least Wilson survived to tell the tale. Other plant hunters got eaten by wild animals (such as one Victorian orchid hunter eaten by a tiger in the Philippines) or were burnt alive, beheaded, shot, or speared to death.

Some died in natural disasters such as earthquakes, or were murdered as a result of colonial rivalries between European countries vying with each other for control of regions rich in natural resources. Others drowned while attempting to cross tropical rivers, or in shipwrecks while making the long and hazardous journeys from their homelands to those far-flung parts of the planet most rich in a diversity of flora. Yet others died of infections as a result of tropical parasites, snake and insect bites, or of starvation, or exposure to extreme climatic conditions.

But the biggest killer, without doubt, was disease. Malaria, typhus and yellow fever killed numerous plant-hunters and botanists in their daring quest to seek out new genera and species.

Those who survived – and that list includes many distinguished Irish plant collectors such as Thomas Coulter and Augustine Henry – live on through the remarkable legacy of plants they bequeathed to us. You’ll find the clues in the Latin species names of many plants found growing in Irish gardens. Examples include Romneya coulteri, Lilium henryi and Magnolia wilsonii.