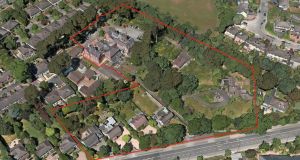 When its latest acquisitions are taken into account, it is understood that Homeland has assembled an overall site of about 1.99 hectares (4.92 acres)

Its motivation for acquiring the homes stems from a deal in February 2016 that saw the company quietly acquire the neighbouring St Joseph’s House facility for redevelopment and, when its latest acquisitions are taken into account, it is understood that Homeland has assembled an overall site of about 1.99 hectares (4.92 acres).

Initially, Homeland sought planning permission in 2017 for a development of 133 apartments and six houses on the site and a final grant of permission for the scheme, to be named Berwick Pines, was obtained last year.

Given multiple changes in planning regulations since the developer first sought planning permission, including the introduction of build-to-rent planning guidelines and the lifting of the cap on building heights, it is likely that Homeland has ambitions for a far greater density scheme on its newly expanded site compared to its original plan.

A higher density development on the expanded site should not be difficult to justify given the site’s location. It is just a few minutes’ walking distance from centres of employment at Central Park, South County Business Park and Sandyford Business District, home to major employers such as Microsoft, Google and Facebook. It is also situated within walking distance of two Luas stops and the N11 Quality Bus Corridor, affording ease of access to Dublin’s city centre.

Elsewhere, the developer has been refused planning permission for a development of 67 homes at its Ard na Glaise site at Stillorgan Park. A large number of objections were received from locals opposing the application and the local council ruled that the scale of the proposed development was excessive and that it would “depreciate the value of property in the vicinity”. That decision has been appealed by Homeland to An Bord Pleanála, which is due to reach a decision on the appeal in the coming weeks.