Damien Hirst to build a town in Devon 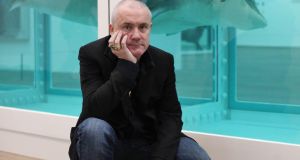 His plans, submitted last December, to build a new town on the edge of Ilfracombe, have just been approved by North Devon Council.

The 187 acre site will include 750 houses, shops, a primary school, sports pitches, woodlands and a healthcare facility. Hirst has already put his stamp on Ilfracombe, which is adjacent to his own home, Winsham Farm (part of the land for the new development will come from Winsham Farm).

He has a restaurant, a café and an art gallery in the town, and has also loaned the harbour area one of his trademark-shocking works. Verity is a 20m (67ft) tall bronze and stainless steel statue of a pregnant woman holding a sword aloft. It was installed with some controversy, with many hoping for a tourist boost along the lines of that garnered by Antony Gormley’s 1998 Angel of the North in Newcastle Gateshead; while others gaped at the figure.

Despite saying that Hirst “has a horror of building anonymous, lifeless buildings,” the plans for the new town, currently called the Southern Extension, by Hirst’s architect Mike Rundell look rather tame in comparison.