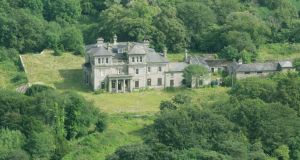 Whitfield Court, Co Waterford is in receivership and for sale by private treaty for €1.35 million 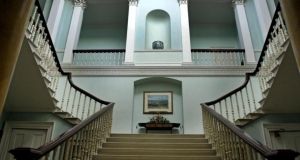 Why is it of interest?
Whitfield Court outside Kilmeaden in Co Waterford is an early 19th Century Italianate style country house built for William Christmas, replacing an earlier house on the same site. It is a listed building in the Waterford County Development Plan and described as a building of national importance by the National Inventory of Architectural Heritage.

Designed by Daniel Robertson, it has two fine porticos both of which once led to formal gardens with wooded parkland beyond. Inside, there is a grand ballroom, large reception rooms, a cantilevered staircase leading to 11 bedrooms. The house was owned by the Chavasse family throughout the 1800s and later the Dawnay family. Ex-British Army man Hugh Dawnay ran an international polo school at Whitfield from 1976 to 2002 and then sold the estate to Co Antrim developer Alastair Jackson for more than €4 million. Jackson secured planning permission for a lavish golf resort with a luxury hotel complex and lakeside hotel lodges. Following appeals and delays, however, this project was never realised. Whitfield Court is now in receivership and for sale via Sherry Fitzgerald.

What state of dereliction is it in?
The house and surrounding parklands have been abandoned for almost 10 years. It was burgled a few years ago, resulting in extensive damage to the cast-iron balustrades on the staircase and removal of some of the fine 19th century fireplaces. The lead from the roof was also removed resulting in leaks and dry rot.

What repairs have been carried out?
Following requests from Waterford County Council, the receiver employed a conservation engineer to prop up the façade and ceilings over the ballroom following extensive damage by dry rot. “We have engaged with the building constantly since it came into receivership,” says Rosemary Ryall, Waterford conservation officer. “Repair work to the roof has been carried out and security measures put in place. Hopefully, full restoration work will follow when the house is sold.”

According to David Ashmore of Sherry Fitzgerald, a conservation survey with estimated costs of restoration has been carried out.

Who is championing its cause?
The Irish Georgian Society wrote to Waterford County Council five years ago raising its concerns about Whitfield Court. An Taisce have also raised their concerns about the property.

Tim Ryan, a conservation engineer and member of An Taisce properties committee, has had access to the house. “It’s a grandiose building but [much of ]what would have attracted people to it has been destroyed. The ballroom is still gorgeous but there is extensive damage to the ceilings and staircase. It’s not a building that will lend itself to public use so it will need an investor with a lot of money,” says Ryan.
What happens next?
The selling agents are hopeful that a sympathetic buyer will express interest in the property which is for sale by private treaty for €1.35 million.

“We are drawing in international buyers and showing the property to select parties,” says Ashmore. “Whitfield Court is a very important building which will hopefully attract a buyer. Two country houses have been sold and restored in Waterford in the last two years. The market has improved. Restoring these properties is also good for the landscape and keeping [conservation] skills and trades alive,” adds Ryan.

If you know of an important building that has fallen into disrepair, email buildingsatrisk@irishtimes.com