One of the last Queen Anne-style houses in Ireland, it is believed to have been designed by William Robinson, who also did Kilmainham Hospital and Marsh’s Library 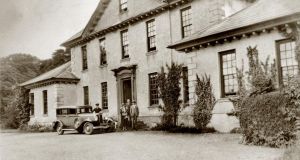 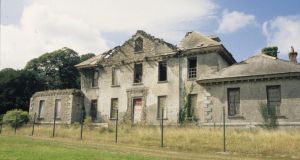 Kilmacurragh House, near Kilbride in east Wicklow stands in ruin in the midst of one of the most important collections of mature exotic trees in Ireland. Deemed to be one of the last Queen Anne-style houses in Ireland, it is believed to have been designed by William Robinson, the surveyor general of Ireland in the late 17th century.

Robinson’s work included the Royal Hospital Kilmainham and Marsh’s Library. The original house was two storey with five bays with single-storey wings added in 1843, according to An Introduction to the Architectural Heritage of County Wicklow (National Inventory of Architectural Heritage, 2004).

Kilmacurragh House, also known as Westaston, was owned by the Acton family from the late 1700s until the 1940s. The house was abandoned during the 1920s and was later run as the Kilmacurragh Park Hotel by Charles Budina from Germany. Thereafter, a dispute over its ownership led to the Land Commission acquiring the property in 1974.

The house, walled gardens, arboretum and agricultural land was managed by the Forest and Wildlife Service until the Office of Public Works (OPW) took it over in 1996. Since then, the gardens has been maintained, restored and re-planted by the National Botanic Gardens.

After Kilmacurragh House and Gardens were acquired by the Land Commission, the house was seriously damaged by fires in 1978 and 1982 and later stripped of most of its fittings, front door and staircase. So when the National Botanic Gardens took it over, it was already derelict.

Currently, the windows are shuttered but without glass. The main entrance is boarded up. Most of the roof has fallen in and the entire house is fenced off from public access. “It was classified as a ruin when it came into our hands: there is no legal onus on us to fix it but we are duty bound to protect it,” says Matthew Jebb, director of the National Botanic Gardens.

Thomas Pakenham, tree expert, author and chairman of the Irish Tree Society feels very strongly that Kilmacurragh House should be restored. “The Office of Public Works must now realise that it’s their obligation to restore the house. There is currently no space for exhibitions or an interpretative centre.

The house is the centrepiece of these botanical gardens – which are the most important internationally in Ireland – partly due to the close contact the Acton family had with the early plant explorers in the 19th century.

“The acidic soil is much more suitable at Kilmacurragh for growing trees and the climate is milder in winter so certain trees and plants grow there that can’t grow in Glasnevin. It’s complementary to the gardens in Glasnevin.”

“I feel strongly that the OPW has shirked its responsibility for many years. And while spending a great deal of money restoring the glasshouses in Glasnevin, Kilmacurragh has been passed over.”

The gardeners at Kilmacurragh and particularly the head gardener, Seamus O’Brien have also taken a strong interest in the past, present and future possibilities for Kilmacurragh House.

“Everybody who visits asks about the house. Letters have been written to the Office of Public Works about what is happening to the house. There is always a great sadness expressed by visitors that the house is in ruins,” says O’Brien.

Kilmacurragh Gardens themselves are a plant-lover’s paradise, almost a secret garden with all exotic and native species identified. As well as a spectacular variety of southern hemisphere conifers, it has the greatest collection of Himalayan rhododendrons in Europe. It attracts about 50,000 visitors each year.

It’s difficult to say. Some people speculate that funding for works to Kilmacurragh House have a greater chance now with Wicklow TD Simon Harris holding responsibility for the Office of Public Works.

“The advantage to Kilmacurragh is that there is a cluster of tremendous gardens nearby including Mount Usher, Powerscourt Estate and Kilruddery. Funding is incredibly tight but priorities can shift and change. At the moment, we are busy restoring the gardens at Kilmacurragh,” says Jebb. The National Botanic Gardens are also installing a café in the courtyard building which is due to open next May.

If you have information about an important building that has fallen into disrepair please email buildingsatrisk @irishtimes.com

Michael Harding: The woman at the checkout said my mask made me look constipated
10

Tell Me About It: ‘Why am I the one always left alone?’
Real news has value SUBSCRIBE