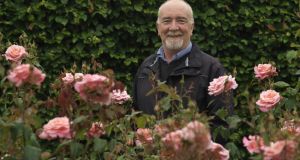 If you’re a dedicated rose-lover, then perhaps you already know the story of ‘Peace’. An aristocrat amongst rose cultivars which celebrates its 80th birthday this year, this hybrid tea rose was bred in 1935 by the French horticulturist and third-generation rose-breeder Francis Meilland, who very quickly realised that he’d created a plant of exceptional quality. But just as his rose (at that stage unnamed and known only by the identification number ‘3-35-40’) began to attract the interest of the international horticultural community, the second World War broke out. Fearful that the rose might be lost to cultivation, the Meilland family arranged for its budwood to be smuggled out of France just before the country’s occupation by the German forces.

From France, it made its way to the USA and an American nurseryman by the name of Robert Pyle, who carefully propagated and continued to trial the cultivar on behalf of the Meillands. In April 1945, a decade after its “birth” and as Berlin finally fell to the Allied Forces, the rose once known as ‘3-35-40’ was formally christened as ‘Peace’ and went on to become one of the best-selling, best- known rose cultivars of all time, eventually earning itself a place in the Rose Hall of Fame. Less well known is the fact that ‘Peace’ also has an Irish connection; one of its parents is Rosa ‘Margaret McGredy’, bred by the famous Northern Irish rose nursery McGredy’s in the 1920s.

If you’d like to see and smell ‘Peace’’s giant, ruffled, yellow-pink scented blooms for yourself, then I suggest paying a visit to St Anne’s Rose Gardens in Raheny, whose annual rose festival takes place this weekend. Created in 1974 by Dublin City Council (then Dublin Corporation) at the suggestion of Clontarf Horticultural Society, these six-acre, oval-shaped gardens are home to more than 20,000 rose plants (and 200 different rose varieties/ cultivars), whose seasonal display of fragrant, colourful blooms is on a scale rarely seen. ‘Peace’ aside, you’ll find many other roses with significant Irish connections growing in these historic Dublin gardens; amongst them is the double-pink flowering floribunda ‘Anna Livia’; ‘TerryO’, which is named after journalist and writer Nuala O’ Faolain’s father; the saucily-named, fragrant, double-pink ‘Sexy Rexy’; which is one of the most famous of all the McGredy-bred roses; and in particular the silver-pink, long- flowering ‘Souvenir de St Anne’s’. A “sport” of ‘Souvenir de la Malmaison’, the latter was famously first discovered growing in the gardens of St Anne’s by a head gardener of Lord and Lady Ardilaun, the former private owners of this historic Dublin estate.

But caring for a garden like this is not (if you’ll excuse the pun) always a bed of roses, as Dublin City Council’s district parks officer Mick Harford explained to me when I visited earlier this month. Even allowing for a carefully scheduled, labour-intensive regimen of pruning, feeding, spraying and dead-heading, rose plants gradually lose their vigour when grown in the same soil for too long, a phenomenon known as “rose sickness” or “rose replant disease” which has long puzzled both scientists and gardeners. The most effective solution is to dig out and replace the affected soil to a minimum depth of 1ft/30cm before replanting, a daunting proposition with rose gardens as large as those of St Anne’s, but one which Harford expects will return them to full, floriferous health.

The excavation and replanting of the beds will be a phased process, beginning this autumn and continuing over the next five years. But there’s also the important matter of plant conservation to consider.

Many of the heritage rose varieties growing in the gardens of St Anne’s – the majority of which were planted there in the early 1970s – are no longer commercially available, making their conservation all the more important, and so the propagation of young, replacement plants from cuttings has also already begun; There are also plans to introduce some newer, highly regarded rose cultivars; Harford says that he’d be happy to receive suggestions from the country’s gardeners as to which might be the most worthy additions.

In the meantime, these much-loved historic Dublin rose gardens continue to be enjoyed by thousands of visitors each summer. Many people come simply to drink in the glorious sight and intoxicating smell of these beautiful flowers in full bloom, while a few, explains Mick Harford, have more serious matters on their mind. “Walking through the gardens one day, I almost interrupted a young man on bended knee to his girlfriend. I had to duck into the bushes to avoid spoiling the magic moment,” he says.

“On another occasion, one of the gardeners came racing in to tell me that that it appeared that an anonymous member of the public had maliciously spread granular weedkiller on a rose bed mass-planted with the cultivar ‘Loving Memory’ . On closer examination, we realised with surprise that it was in fact human ashes. It’s not something that Dublin City Council would, for one second, ever formally permit, but that said, you can easily understand why a loved one might think it was the perfect spot.”

Now’s a good time to summer-prune the lovely climbing plant Wisteria. Not only does this help to control its size but it also lets light into the plant, helping the wood to ripen and encouraging the plentiful formation of flower buds for next year. Using a sharp secateurs, cut back this year’s long, whippy green shoots to five or six leaves, cutting back to just above a bud. Come next January/ February, these same shoots should be pruned back again to just 2-3 buds. To see a video on pruning wisteria, visit rhs.org.uk

Strawberry plants are beginning to throw out lots of runners that can easily be used to make new plants. Simply use a section of strong wire to peg each runner down into the soil or (if you want to transplant the new plant elsewhere in the garden) into a pot filled with John Innes compost, which should be buried up to its rim in the ground. Once rooted, use a sharp secateurs to snip the runner away from the parent plant.

Now that chives have finished flowering (left), it’s time to give them a severe haircut in order to encourage the production of fresh new leaves and prevent the plant from self-seeding all over the place. . Using a sharp garden shears, cut the tatty foliage and faded flowers back down to just above ground level. Other perennial herbs that benefit from a severe summer haircut include lovage, marjoram, sorrel, lemon balm, mint and fennel.