A chance to spend 99 years in Venice – in the afterlife

Can’t afford a Grand Canal palazzo? You could still lease a plot on the ‘isle of the dead’ 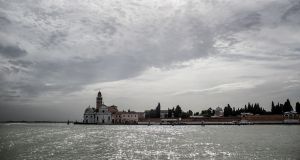 It was not, admittedly, quite so straightforward. But that was the gist of a call for bids that appeared on Venice’s municipal website in March. Up for grabs were four chapel tombs in the cemetery of San Michele, Venice’s “isle of the dead.”

The cemetery, built after Napoleon’s administration ordered the residents of Venice to bury their dead outside the city center, has for more than 200 years been a final resting place for Venetians, as well as a few chosen foreigners given special dispensation to be buried there.

Now, that honor will go to the highest bidders.

Last year, Mayor Luigi Brugnaro decided to put up for auction five private chapels built by old Venetian families but abandoned for years. The proceeds will be used to restore older sections of the cemetery that have been worn by exposure to the elements.

It may not be a palazzo on the Grand Canal, but it’s a rare chance to spend the hereafter — or at least 99 years of it, renewable for another 50 — in an exclusive haunt that is normally open only to Venice residents, relatives of those buried in the cemetery and celebrities with a strong connection to the city.

Be forewarned, however: The chapels need considerable work and, like a Venice palazzo, will require eternal care.

A chapel here needs “the same maintenance as a palazzo in the historic center,” Massimiliano De Martin, the municipal councilor responsible for urban planning, said during a stroll through the cemetery grounds.

In March, a French entrepreneur secured the Salviati Chapel by bidding 350,000 euros, or around $410,000, in the first auction. The chapel — part of the hemicycle entrance to the cemetery, where two other chapels are up for auction — was in good shape after a recent restoration paid for by the city.

The new owner — Dominique Vacher, the director general of Laboratoires Genevrier, a pharmaceutical company — and his wife already owned an apartment in the lagoon city, and decided to extend their stay.

Venice is billed “as the city where happiness is eternal,” he said in a statement issued by City Hall.

There will be plenty of room: The tomb chamber previously held seven corpses.

The two nearby chapels available — the Testolini Quadri, with a base price of more than 256,000 euros, and the slightly larger Azzano, starting at over 277,000 euros — each sleep, so to speak, two corpses and countless funerary urns for ashes or bones. Two other chapels — the Venier and the Olivieri — are in other quadrants.

The cemetery was built during the French occupation of Venice, when it was decreed that burying the dead on the main islands was unsanitary. It was later enlarged.

Until 1954, all private tombs in the city, whether below or above ground, were leased for eternity. Since then, the city of Venice has leased tombs for a varying number of years. In some cases, leases can be renewed.

Otherwise, graves are exhumed on a schedule posted at the cemetery entrance and on its website. Exhumations take place throughout the year aside from July and August, when “it’s too hot,” said Maurizio Zaranto, the cemetery’s manager. The remains can be cremated, and the ashes can go into a columbarium niche for 30 years, renewable for 20 more. Or bones can be deposited into the cemetery’s common ossuary.

Since 2011, the city has also allowed ashes to be scattered in the lagoon, as long as an official is present and the city’s mortuary police have granted approval. This is true for foreigners’ ashes, too.

In the San Michele cemetery, relatives of the deceased typically tend the tombs, and on a recent afternoon Venetians of various ages brought fresh flowers, brushed off tombstones and fought off ravenous mosquitoes.

Yet many older tombs are in need of specialized restoration, an issue that has grown more dire as Venice’s population has dwindled. There are now 85,000 people resting in peace on the island, compared with 56,000 Venetians living in the historic center, down from 175,000 in 1951.

“There are more dead Venetians than live ones — it’s a fact,” De Martin said.

The areas of the ceremony overseen by the Protestant and Orthodox Churches are also in a state of considerable disrepair, even though most luminaries buried on the island are in these sections. In the case of the Reparto Evangelico, the Protestant grounds, a recently formed foundation has begun fundraising in Europe and the United States to pay for a restoration.

As with the Roman Catholic section of the cemetery, the Protestant graves are the responsibility of the families, but many no longer live in Venice. With a smaller population, “we don’t have the same pressure faced in the Catholic part” to make space for new tombs, said Oddbjorn Sormoen, an art historian and director of the fundraising foundation.

So far, the group has mapped its quadrant to identify the areas most in need of repair and assess ways to redress them.

“Our next project is restoring the gateway to the chapel,” said John C. Mowinckel, the foundation’s president. His great-grandfather, Johan Ludwig Mowinckel — a Norwegian businessman who traded in salted cod, used in the traditional Venetian dish baccalà — is buried at San Michele.

“Oh, if we could get a dollar from every Protestant in America,” the fundraiser added wistfully.

Restoration efforts on the Catholic side are, for now, financed by money raised by the auctions.

The first lot included five chapels, and officials said other chapels had been identified for future bidding. “We’re promoting the auction throughout the planet, because Venice has always been a city open to the world,” said De Martin, the city councilor.

While far from the maddening crowds that throng the city’s famous St. Mark’s Square, the cemetery has become a tourist magnet, both for those paying homage to the celebrities buried there and for those wanting to savor its peace and solemnity.

“You see, you’re smiling here in the cemetery,” De Martin said. “You don’t die here. This is the sense we want to give: that in Venice, no one dies. You live forever, in another way, but you continue to live.” – New York Times