Each summer the Bandon-born TV presenter and comedian spends more than two months at his home in Ahakista, close to Bantry in West Cork 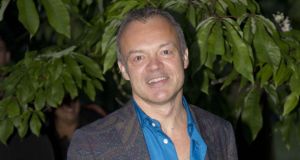 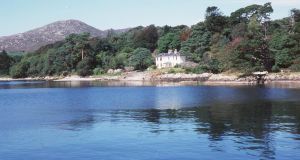 From helping as compere on a charity fashion show, to judging a competition for the Ahakista Community Association, to mingling in local bars, restaurants and cafes, Graham Norton gets pretty stuck in locally when he holidays in west Cork each year.

Of course, it helps that Norton grew up in Bandon, which is within an hour’s drive. After he left Ireland, Norton used to visit Cork city, where he had a two-bedroomed penthouse apartment which he reportedly sold in 2004 for €350,000, netting €100,000 profit in the process. Shortly afterwards he bought Ahakista House, a fine period home with a view over Dunmanus Bay, close to Bantry, for somewhere in the region of €1.6 million, hiring Stephen Smith of Edge Architecture to help with renovations.

In Cork recently to collect an honorary doctorate from University College Cork, Norton spoke about finding his dream holiday home, or more accurately, how his sister found the house for him. “It’s just outside Bantry on the Sheep’s Head peninsula which is a beautiful bit of coast. I grew up in Bandon, so that whole bit of west Cork I knew very well. I had a place in the city and I was looking for a seaside place and my sister found this house. It is a paradise. I love it.”

Is there a particular clique of like-minded media or arty types he hangs around with in west Cork, I ask? “I don’t think we’re an arty set. We’re just dossers who get time off and come to a very beautiful place. I do think it is an artistic place in that there are a lot of artists down there, and potters, and people like that. If you are attracted by things that are visual, there is no denying it is a gorgeous part of the world. It is far less exploited than Cornwall or Devon, which are similarly beautiful, but it is so much more remote and unexplored.”

Norton has been holidaying in the area since the early 2000s, and would have witnessed the last excesses of the Celtic Tiger years, followed by the subsequent downturn. Is it fair to say that areas in west Cork came through those years better than most?

‘Stuck now’
“The area was not really unscathed. What happened was some people came there on a sunny weekend, bought a house and they are kind of stuck now. You put your retirement money into a house,” he said. “I do feel sorry for those people who weren’t to know it was all built on a house of cards or whatever. The country will come through all of this. It is like anything that happens to you in life that’s terrible, you can’t just go oh actually, let’s call it quits, I’m out of here.”

Norton says some of his favourite places to eat locally include the Good Things Cafe in Durrus, which is also a cookery school, as well as Blairscove House and Restaurant, another popular spot also in Durrus.

“If I’m just by myself I’ll stay in my house,” he says. “I kind of run an unofficial B&B for the summer where friends from London come over.” Does this mean he’s up at the crack of dawn cooking his guests the full Irish? “I do that for a couple of days and then I’m like, ‘you know what, I have had enough’ so then we head out. We go to Durrus a lot, or we might drive to Kilcrohane, where the Post Office cafe is nice, and they do lots of nice things.There’s also a lovely little pub on the pier in Ahakista, or we also go to the Heron Gallery for lunch. They have beautiful food, and we sit out in the garden and it’s really lovely.”

While Norton hasn’t noticed a significant change in the local welcome over the years, he has noticed that there were fewer locals around to do the welcoming. “What was odd was if you came to this country from abroad looking for the Irish welcome, a lot of the people working in service industries tended not to be Irish,” he says. “So that seemed very peculiar to me and I think to a lot of visitors and not in a kind of xenophobic way. It was just odd that I would come home and everyone else seemed to be gone. So that was an odd feeling. I think that’s changing a lot too.”

When he is not in Ireland, Norton likes to visit South Africa and also New York, where he has invested in property in the past. “I go to New York a lot, which seems odd living in London. There is a different energy to that city. It is fantastic.

“I just did a safari in Tanzania and I’d recommend that highly.”

As someone who admits to have run out of Ireland in his early 20s, at a time when the country was not particularly welcoming either to Protestants or homosexuals, Norton finds it ironic that his time every summer in west Cork is one of the most anticipated parts of his year.

“I come back every year for two to two and a half months. It is incredible to me that I enjoy that so much, given that I ran out of the place. It is like my favourite part of the year now.”

Aberdeen to Athens by bike: Homesick student cycles from Scotland to Greece during pandemic
7

Caroline Crowley obituary: A great listener who ‘even saved lives’
9