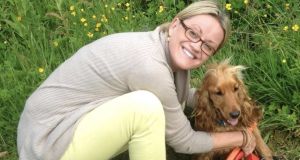 Cathy Brooks: “If I’ve to give blood for the rest of my life, I don’t want my blood to be dumped because there’s too much iron in it. I want my blood used.”

“The first symptom I had was a hot flush. To say peri-menopausal was not on my radar is an understatement” says Cathy Brooks, development manager with the UCD Foundation.

“I had no idea. I’d just lost my mum in October and I remember by Christmas being with friends in Collins Barracks, having a coffee walking around and I just started getting these hot flushes and I was thinking ‘what the hell is this?’ To be honest, I just attributed it to the grief and losing my mum and all of that”.

“It was only when I googled it and I saw the symptoms that I thought, ‘could I be?’ I’m too young.”

Initial blood tests suggested Cathy was not peri-menopausal but with her symptoms continuing she decided to seek advice from a second GP. On hearing her symptoms, the doctor immediately suspected haemochromatosis and decided to carry out a blood test.

“I like to think I’ve a very positive outlook on life,” Cathy says, explaining how she made the decision that she wasn’t “going to focus on this”. “I just got on with living life.

“Every year I go for a check-up in the haematology clinic in St Vincent’s . They do your bloods before and they check your liver, your heart – all the organs that can be damaged. It’s like going in for an annual MOT really”, she continues.

“Only in the last six months I’ve started to get really achey in my index finger and my middle finger. When I close my fist I can feel my fingers kind of crunching. That’s a symptom of haemochromatosis.”

Because Cathy’s “joints are getting really stiff”, she has been referred to a rheumatologist.

Cathy describes herself as being “very active”.

“I do a lot of sport. I do it for my mental health as well as my physical health,” she adds, discussing her love of rowing and cycling. But “this year, like most of the world, I’ve just been sitting on the couch eating,” she says. “I’m more stiff now because I’m not active”.

Cathy has phlebotomies every three months to treat her haemochromatosis but she’s keen that her blood doesn’t go to waste just because of her condition.

“If I’ve to give blood for the rest of my life, I don’t want my blood to be dumped because there’s too much iron in it. I want my blood used. So I go to this clinic where they can use my blood,” she says adding that people with haemochromatosis travel from all over the country to the clinic in Stillorgan for this very reason.

The service has been extended and now, many people with haemochromatosis can become regular blood donors at all blood donation clinics nationwide, including local community clinics.

“Potential donors must meet specific haemochromatosis management criteria”, the Irish Blood Transfusion Service states, which includes having completed iron depletion therapy, and not suffering from any serious complications as a result of haemochromatosis.

“I happened to give blood about two weeks ago. I’ve heard loads of people are having trouble giving blood during coronavirus. I haven’t had any problem. I’ve had nothing but a positive experience with all of this and all the professionals.”

Haemochromatosis is a genetic condition which, in many people who have the condition, gives rise to excess iron absorption and retention within the body,” explains Prof Suzanne Norris, professor of hepatology and gastroenterology, Trinity College, Dublin.

“Over time, and it’s a very slow, gradual process, iron accumulation builds up and the iron is absorbed and deposited in various organs. We have the highest rate of haemochromatosis of any European and worldwide country”

What are the symptoms of haemochromatosis?

“Chronic fatigue is the main symptom,” Prof Norris explains. “Achey joints would be another. The problem with haemochromatosis is that it doesn’t really have a symptom that would make you say ‘aha that’s haemochromatosis’. It’s all subtle signs. It’s a disease that’s under the radar because it doesn’t produce a symptom that would make a doctor think ‘that has to be that condition’. It’s literally chronic fatigue and unfortunately most chronic conditions will give rise to chronic fatigue.”

How is haemochromatosis diagnosed?

“To make the diagnosis, you need to have inherited the gene for excessive iron accumulation from both parents. Only about 50 per cent of people who have the two genes actually ever develop iron overload, so there’s obviously another trigger, which may be environmental, we don’t quite know,” Professor Norris says.

What are the potential complications of haemochromatosis?

“Bronze diabetes, or brown discolouration of the skin is actually quite rare. There are other symptoms which may occur around depression and low mood. It’s not clear whether that’s just in relation to general inflammation because of the iron burden, or because of not feeling well and low mood associated with chronic ill health in that regard.”

What is the treatment for haemochromatosis?

“The treatment is very simple. It’s blood letting or having blood removed on initially maybe a weekly or monthly basis in the acute stage when the person is coming in with a new diagnosis,” Prof Norris explains.

“Once the excess iron has been removed it’s like giving blood to the blood bank, you donate blood once or twice a year, that might be sufficient for most people. Some people may do it four times a year and that keeps the condition totally under control.

“When the iron level is back within the normal range and it’s maintained at that level by either once to four times a year, depending on the person’s needs, it keeps it completely under control and there is no risk of developing serious potential complications from late diagnosis – once it’s diagnosed early,” Professor Norris emphasises.

“Our message is always, at this time of year, for healthcare professionals to really think about chronic fatigue – could it be iron overload, rather than anaemia giving rise to chronic fatigue.

For more information, visit the Irish Haemochromatosis Association at haemochromatosis-ir.com (to donate €4, text IRON to 50300).

Move over chicken Kiev: a tasty new take on a retro classic
6

My biggest lockdown mistake? Relying on TikTok as a co-parent
8