Vaccinated people will still need to wear a mask. Here’s why

New vaccines should protect you from Covid. It’s unclear if they stop you spreading the virus 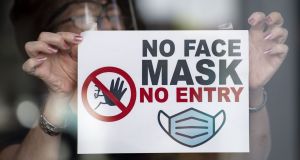 The new Covid-19 vaccines from Pfizer and Moderna seem to be remarkably good at preventing serious illness. But it’s unclear how well they will curb the spread of coronavirus.

That’s because the Pfizer and Moderna trials tracked only how many vaccinated people became sick with Covid-19. That leaves open the possibility that some vaccinated people get infected without developing symptoms and could then silently transmit the virus – especially if they come in close contact with others or stop wearing masks.

Mucosal vaccines, like the nasal spray FluMist or the oral polio vaccine, are better than intramuscular injections at fending off respiratory viruses

“A lot of people are thinking that, once they get vaccinated, they’re not going to have to wear masks any more,” says Michal Tal, an immunologist at Stanford University. “It’s really going to be critical for them to know if they have to keep wearing masks, because they could still be contagious.”

In most respiratory infections, including the new coronavirus, the nose is the main port of entry. The virus rapidly multiplies there, jolting the immune system to produce a type of antibody that is specific to mucosa, the moist tissue lining the nose, mouth, lungs and stomach. If the same person is exposed to the virus a second time, those antibodies, as well as immune cells that remember the virus, rapidly shut down the virus in the nose before it gets a chance to take hold elsewhere in the body.

The coronavirus vaccines, in contrast, are injected deep into the muscles and quickly absorbed into the blood, where they stimulate the immune system to produce antibodies. This appears to be enough protection to keep the vaccinated person from getting ill.

Some of those antibodies will circulate to the nasal mucosa and stand guard there, but it’s not clear how much of the antibody pool can be mobilised or how quickly. If the answer is not much, then viruses could bloom in the nose – and be sneezed or breathed out to infect others.

“It’s a race: it depends whether the virus can replicate faster, or the immune system can control it faster,” says Marion Pepper, an immunologist at the University of Washington in Seattle. “It’s a really important question.”

This is why mucosal vaccines, like the nasal spray FluMist or the oral polio vaccine, are better than intramuscular injections at fending off respiratory viruses, experts say.

The next generation of coronavirus vaccines may elicit immunity in the nose and the rest of the respiratory tract, where it’s most needed. Or people could get an intramuscular injection followed by a mucosal boost that produces protective antibodies in the nose and throat.

The coronavirus vaccines have proved to be powerful shields against severe illness, but that is no guarantee of their efficacy in the nose. The lungs – the site of severe symptoms – are much more accessible to the circulating antibodies than the nose or throat, making them easier to safeguard.

Still, he and other experts say they are optimistic that the vaccines will suppress the virus enough even in the nose and throat to prevent immunised people from spreading it to others.

AstraZeneca, which announced some of its trial results in November, says that volunteers have been testing themselves regularly for the virus and that those results suggest the vaccine might prevent some infections.

Vaccinated people who have a high viral load but don’t have symptoms ‘would actually be, in some ways, even worse spreaders, because they may be under a false sense of security’

Pfizer will test a subset of its trial participants for antibodies against a viral protein called N. Because the vaccines have nothing to do with this protein, N antibodies would reveal whether the volunteers had become infected with the virus after immunisation, according to Jerica Pitts, a spokeswoman for the company.

Moderna also plans to analyse blood from all its participants and test for N antibodies. “It will take several weeks before we can expect to see those results,” says Colleen Hussey, a spokeswoman for Moderna.

The trials have so far analysed only blood, but testing for antibodies in mucosa would confirm that the antibodies can travel to the nose and mouth. Tal’s team is planning to analyse matched blood and saliva samples from volunteers in the Johnson & Johnson trial to see how the two antibody levels compare.

In the meantime, Bhattacharya says, he is encouraged by recent work showing that people who received an intramuscular flu vaccine had abundant antibodies in the nose. And a study of Covid-19 patients found that antibody levels in saliva and blood were closely matched – suggesting that a strong immune response in the blood would also protect mucosal tissues.

Only people who have virus teeming in their nose and throat would be expected to transmit the virus, and the lack of symptoms in the immunised people who became infected suggests that the vaccine may have kept the virus levels in check.

But some studies have suggested that even people with no symptoms can have high amounts of coronavirus in their nose, notes Dr Yvonne Maldonado, who represents the American Academy of Pediatrics at meetings of the US federal Advisory Committee on Immunisation Practices. The first person confirmed to be reinfected with the coronavirus, a 33-year-old man in Hong Kong, also did not have symptoms but harboured enough virus to infect others.

Vaccinated people who have a high viral load but don’t have symptoms “would actually be, in some ways, even worse spreaders, because they may be under a false sense of security,” Maldonado says. – New York Times