The life span of a man: what men worry about, and what they should worry about

And the real health risks for men, as explained by Dr Ian Banks of the European Men’s Health Forum 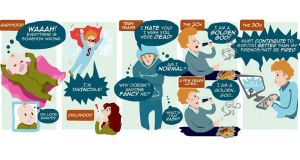 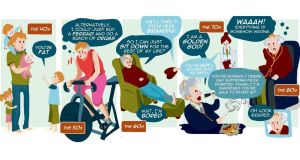 Babyhood: “In the period immediately after birth, male children have a higher mortality rate. It’s not quite as bad now because medical treatment is so much better, but in less developed countries there is a difference between girls’ and boys’ survival rates.” The infant mortality rate in Ireland is one of the lowest in the world.

Childhood: “Accidents are the main risk in childhood, particularly for boys. You don’t see a lot of illnesses any more because of the vaccination programmes. Measles, encephalitis, chickenpox and meningitis used to be common but we don’t have anywhere near the levels we used to. Some of the cancers you still see, but they are much more treatable than in the past.”

Teenage years: “From teen years onwards the accident rate for boys is enormous compared with girls. Another big issue in Ireland is suicide. Those particularly at risk are boys from lower-income groups and boys who are gay…Certain illnesses can also emerge. The Hodgkin’s cancers start to kick in then and some genetic conditions, such as cystic fibrosis, start to show. Type 1 diabetes can kick in, and mental illnesses such as schizophrenia and depression can emerge from about 18.”

20s: “You’re still seeing deaths from accidents and this continues into the 30s.” Lifestyle issues such as smoking, drinking and diet, he says, have a crucial impact on health, but have more of an impact later in life. “A lot of alcohol abuse in younger men can be linked to mental health issues. And people should always watch their weight. Ireland has one of the highest obesity rates in Europe.”

30s: “The 30s can be when you see the things linked to obesity start to kick in. In the late 30s high blood pressure can develop and can lead to stroke. Strokes are much more common in men than in women. There are no symptoms of high blood pressure and guys don’t get themselves checked nearly as much as women do. They should, from their 30s.”

40s: “Erectile dysfunction can start to show, and can be a warning sign. The underlying causes of erectile dysfunction happen to be the things that kill men most: high blood pressure, hypertension and type 2 diabetes. People can start to have issues with vision and hearing . . . Men don’t tend to go to opticians as much as women do. It’s also when smoking starts to have an effect, causing respiratory and cardio-vascular illnesses.”

50s: “A whole cascade of things can start appearing from the 40s into the 50s. Cancers really start to show themselves: particularly prostate cancer, which men can start getting from their 40s on. Lung cancer is still a big killer, but less than it was. A lot of what was going on earlier in life starts to show now. Obesity leads to type 2 diabetes. Smokers get emphysema, bronchiolitis and bronchitis. Heart attacks are common for men in their late 50s. Many cardiovascular events are predicted by erectile dysfunction.”

60s: “Rheumatic conditions emerge. Also osteoporosis, which is very poorly diagnosed in men because it’s seen as a women’s condition. Breast cancer is also a risk at this age, but very poorly diagnosed; more men will die of it than of testicular cancer … Because of approaching retirement, and an increase in marital breakdown, there’s a big risk of depression and suicide. Although depression can be an issue at any age, it’s becoming a big issue for men in their 60s.”

70s: “Cancers really start to kick in in the 70s: bowel cancer, for example. Postmen, construction workers, fishermen, farmers and other men who have worked outdoors can get skin cancer as a result of long exposure to sunlight. Dementia and Alzheimer’s disease are also issues from the 60s through the 70s, 80s and beyond.”

80s: In general you are susceptible to more of everything in your 80s. (But well done for making it this far.)