The bee’s knees for wounds and infections

Is Surgihoney a medical super honey? 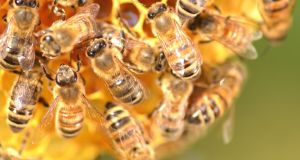 Surgihoney can be produced from any pure honey from any floral source. Photograph: Getty Images/ iStockphoto

The healing powers of honey have been known for thousands of years. Both ancient Greek and Egyptian physicians are said to have valued it and it was used in the treatment of wounds right up to the second World War.

It contains vitamins, minerals, enzymes and sugars, which all help in healing wounds. Manuka is regarded as the most potent honey, but the supply is limited, relying on nectar from a particular tree in New Zealand.

This supply issue has been solved by the developers of Surgihoney, a bioengineered honey whose natural antibacterial properties have been boosted and it can be made from organic honey from any floral source.

It is proving highly effective at treating infected wounds and superbugs. It is believed to work by killing the bugs, removing dead tissue and pus, and then providing a moisture barrier as well as local nutrition.

Surgihoney is being developed by businessman Ian Staples, former managing director of Halfords, the motor accessories chain. It was on his honey farm in Chile in 2009 that Staples began to ask the questions that led to the development of the so-called super honey. He says he wondered why nectar, which is essentially water, sugar and yeast, does not ferment. It doesn’t ferment because it contains hydrogen peroxide, which produces low concentrations of antimicrobial reactive oxygen.

“Honey bees collect and store nectar and when nectar dries out during storage in the hive, the resulting honey has no free water, so it cannot ferment,” Staples explains.

“With no need for honey to have the antimicrobial protection conferred by reactive oxygen in nectar, evolution has ensured that most honey varieties have a greatly reduced ability to generate it.”

Perhaps Staples’s botanical background – he won a first-class honours degree in plant physiology at Reading University – fuelled his conviction that there must be a way of reintroducing this lost characteristic of reactive oxygen back into honey in increased concentrations to make an effective antimicrobial agent.

He travelled to Sligo Institute of Technology to consult with a research team – Dr Thomas Patton and Dr John Barrett, and head of life science Dr James Brennan.

They used a bioengineering technique to greatly enhance the diminished reactive oxygen characteristic, the initial research that advanced into the wound care technology.“This reactive oxygen system in honey is highly effective as an antimicrobial and for infection control,” says Patton. “We verified this in the laboratory with multiple microbial strains. Ian Staples and his team then started to prove this fact clinically, helped by consultant microbiologist Dr Matthew Dryden, of Public Health England and the University of Southampton, and his team.”

Dryden was lead author in a study that concludes: “As a wound treatment in the tropics, [Surgihoney] is an ideal, low-technology solution which is easily stored, applied and ought to be cost-effective.”

And unlike more sophisticated medicines, it does not need to be refrigerated. He described the honey as “turbo-boosted”.

Surgihoney not only exerts potent killing power against a wide range of bacteria – including multi-drug-resistant strains – it also has anti-fungal activity and promotes healing of lesions such as burns, diabetic-related ulcers and pressure sores. But unlike Manuka honey, which is derived from a single plant, it can be produced from any pure honey from any floral source.

With thousands of tons of honey made globally, Surgihoney is sourced from honey farms with stringent controls ensuring purity and freedom from antibiotics, chemical fertilisers and pesticides; and gamma ray irradiation guarantees sterility.

“Surgihoney’s secret weapon is its ability to deliver low doses of reactive oxygen to the wound site for several days, rather than a large amount at the time of dressing. It kills bacteria, and promotes healing,” says Staples. Stored in 10g sachets, it simply squeezed on to wounds and dressed with gauze. Pilot trials have been conducted in Hampshire in the UK, Yei civil hospital in South Sudan, and Vaiola hospital in Tonga.

A recent symposium held at the University of Birmingham, heard experts in wound healing and infection control discuss recent developments in Surgihoney and future prospects. In April the product received full accreditation as an antimicrobial wound dressing.

One avenue of research outlined at the symposium by Irish researcher Dr Carl Diver, from the University of Manchester, is the production of “smart dressings” using electrospinning – a fine-fibre fabrication technique – with the aim of determining how effectively Surgihoney can combine with different wound-friendly biomaterials.

Many bacteria can form into resilient structures called biofilms, and Surgihoney has demonstrated a capability to disrupt and destroy them, a property hoping to be exploited by researchers at the University of Southampton. Following lab experiments, they aim to conduct a clinical trial for patients with chronic sinusitis, a condition exacerbated by biofilms.

Buy yourself a dream. . . with the planning headaches sorted
3