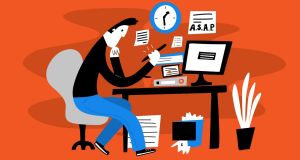 It’s when we allow technology to be the distraction that too much time can get frittered away, says one expert. Photograph: iStock

Once upon a time, smoking at your desk was practically a sign of productivity. I’m not suggesting you rush out and blow a week’s salary on a pack, but I am about to plot a path from the ashed keyboards of yesteryear to our current problem of being hopelessly distracted by technology.

The internet constantly cops the blame for diverting us from our labour, to the point that there are apps – the irony! – to help us resist its pull, from growing a virtual tree to locking us out of social media. Obviously social media is engineered to hook our attention, but perhaps there’s something deeper afoot.

The book Indistractable: How to Control Your Attention and Choose Your Life by Nir Eyal attempts to answer that. Eyal himself tried every trick to keep focused on his writing, such as using a 1990s word processor without an internet connection, before realising that tech is not the problem.

He argues that distraction arises from emotions we’re trying to avoid. Scrolling brings instant relief from intrusive thoughts, just as I would say that lighting a cigarette quelled the same sense of restlessness. Only, smoking didn’t drag us away from our work and into a YouTube vortex.

Why is it that when we’re trying to work, psychological discomfort makes itself heard? It could be that the task itself is causing anxiety – like fear of failure – or it could be we’re so bored that our emotions have the space to emerge. (You’re unlikely to get an existential crisis in the middle of a Netflix binge.)

Melbourne psychologist Dr Matthew Berry thinks distraction has become our number one avoidance technique for pain – more so than drowning it with drugs and alcohol. He says our brains aren’t evolved enough to handle what some researchers call “supernormal stimuli”. These include social media, gaming and pornography, which highly activate our reward system.

If distraction costs us time, then time management is pain management

“I get most distracted when I don’t know the answer to something,” she tells me. “If I had to identify what was making me anxious, it would absolutely be fear of failure. Fear of not knowing the answers. Fear of f**king up.”

At home, these feelings can be harder to handle. “In an office your brain gets downtime when you go to the kitchen and talk to somebody. If you’re working from home, your brain doesn’t get that space. So I think distractions can be useful – it might feel like you’re just doing the laundry, but in the background you’re also problem-solving.”

It’s when we allow technology to be the distraction that too much time can get frittered away. And as Eyal says, “if distraction costs us time, then time management is pain management”.

Dr Berry recommends his clients break their task down into subtasks to try and narrow down which of the subtasks is triggering the fear. “Then ask yourself, ‘What is the fear about? Is it real, or is it just an old story of mine – such as believing I’m bad at something – trying to scare me?’ Sharing that fear with someone is a great way of disarming it.”

A good test of whether it is the task that’s the problem or whether the emotion is related to another issue is to see if you’re able to sit down and calmly read a book, he says. If it’s not task-specific, the next step is to dig deeper into that nondescript “argh” feeling by really trying to identify the specific emotion. “Name it, and then ask yourself: what does that say I need?” Dr Berry says. “Do I need to talk to someone, for instance?”

According to Eyal, practising abstinence by locking yourself out of your favourite social-validation feedback loop won’t work, because banning yourself from doing something only makes you want to do it more (you might have heard of the pop-psychology experiment in which participants are asked to absolutely not think about polar bears).

Eyal suggests making an “identity pact” by giving yourself a moniker. Just as you might say “I am sober” or “I am a nonsmoker”, you say “I am indistractable”.

“I’m down with that,” says Coleman-Hawkins. “I have a narrative of myself as somebody who can be really focused in the morning, and the more I tell myself that, the more it’s turned out to be true.”

When you go back to work in the office, opt out of time-drainers like Slack or WhatsApp

Eyal has some tech tips, too: to receive fewer emails, you must send fewer emails. Further, even if you want to respond while a thought takes you, use a program to delay delivery and thus give the recipient less time to engage in a back and forth.

When you go back to work in the office, opt out of time-drainers like Slack or WhatsApp that have connected you with your coworkers during lockdown. You could also try what Eyal’s wife does to deter their young daughter from chatting: fashion yourself a “concentration crown” (hers is made out of a cheap headpiece with LED lights) to signal that you are not to be interrupted.

If you’re distracting yourself right now by reading this, take a moment to rate your current crisis, from aimless antsiness to Munch’s Scream. Chances are you’ve been distracting yourself from the meaningful messages your own emotions have been trying to communicate. – Guardian