Second opinion: Europe should not blame Muslim migrants for violence against women 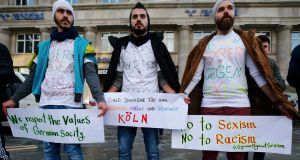 People from Syria hold placards during a rally outside the main railway station in Cologne, Germany. Photograph: Reuters/Wolfgang Rattay

The media have avoided blaming religion for the recent sexual assaults perpetrated on large groups of women in Germany and Sweden. They have rightly identified misogyny as being behind the attacks. However, the role played by religion in the development of arrogant, patriarchal attitudes to women cannot be ignored and misogyny and religion are inextricably linked.

Men are in charge at all levels in all the major religions with male gods and women playing subservient or supporting roles. Theories abound as to why religion was invented. Some believe they evolved to help humans deal with their fear of death and guarantee an afterlife.

Others think religions are about power and control. Feminists argue that religion was invented in order to subjugate women. Who knows what humans had in mind when the first religion (Hinduism) appeared 3,000 years ago. Judaism followed in 2,000 BC, Buddhism in 480 BC, Christianity in 1 AD, Islam in 570 AD, and many other religions evolved before and after these.

Whatever the intention, the net effect of all religions has been, and is now, to control women and interfere with their human rights, including in Ireland. In fact, religious teaching ignores the rights of about 60 per cent of the global population: women, lesbian, gay, bisexual and transgender citizens. Religion, mainly Catholicism, was, with the collusion of the State, responsible for the cruelty inflicted on women in mother and baby homes and Magdalene laundries.

The European convention on preventing and combating violence against women and domestic violence – also known as the Istanbul Convention, which Ireland signed in November 2015 – includes religion as a possible contributor to violence against women. Article 12 states, “parties shall ensure that culture, custom, religion, tradition or so-called ‘honour’ shall not be considered as justification for any acts of violence covered by the scope of the convention.”

Article 42 notes that religion will not be regarded as justification for any act of violence and “in particular, claims that the victim has transgressed cultural, religious, social or traditional norms or customs of appropriate behaviour”. The convention recognises that “violence against women is a manifestation of historically unequal power relations between women and men” and “gender-based”, meaning that women are more likely to be assaulted just because they are women.

A third of women in Europe have experienced physical and/or sexual violence by a current or previous partner. More than half have been sexually harassed and a quarter have been stalked. Nearly half have been subjected to psychological violence such as being denied access to family finances, being humiliated in front of others, or threatened with force if they do not behave in a way their partner thinks appropriate.

Religion is important. Almost 90 per cent of the global population follow one religion or another and what they see and hear are men in powerful roles: male popes, bishops, priests, mullahs, ayatollahs, imams, rabbis or whatever, pontificating about how people should behave. It is no wonder that men and women absorb the idea that men are more important than women and women are inferior. This is no longer acceptable.

Religion must play its part in eliminating misogynistic attitudes that breed gender-based violence. In the short-term, religious leaders can preach on an ongoing basis about the absolute unacceptability of any violence against women, anywhere, for any reason. Long-term, if religions are to have relevance in today’s human rights world, they must change to a 50/50 participation of men and women at all levels. Pigs will fly before that happens.

In the meantime, maybe parents could insist that misogyny is not taught in schools through the religious education curriculum.

Dr Jacky Jones is a former HSE regional manager of health promotion and a member of Healthy Council Ireland. drjackyjones@gmail.com