Personal trainer before the wedding day? Why? Proud to be a bigger bride 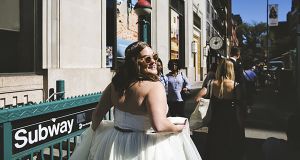 Kelsey Miller on her wedding day. There is increasing exasperation as bigger brides fight for respect in a wedding industry they say is focused on small sizes. Photograph: Katie Osgood via The New York Times

Katie Liepold and her fiancé did not appreciate what they saw, and didn’t see, in their engagement photos.

So, 33-year-old Liepold confronted her photographer for making her size 22 frame look more like a 14 and markedly trimming her fiancé, who wears a size XXXL.

Her very public complaints started via social media, which led to interviews with the news media and a backlash against the photographer who kept the deposit but ended up waiving her fee and apologising.

Supporters from as far as Australia reached out to the couple. “They were all, like, ‘you’re beautiful the way you are’. It was really heartwarming,” Liepold said.

“I’m not a mean person,” said Liepold, who is planning a May wedding. “I just wanted other brides to know she did this and it didn’t show a lot of professionalism.”

The photographer Linda Silvestri did not respond to requests seeking comment. She did respond on a Facebook post, explaining she did not mean to body shame the couple: “My post was not fat shaming them. I am overweight. My frustration was unrealistic expectations on their part. Their weight was the issue that led to the difficulty in shooting the session and getting creative with posing. I never ever body shame anyone and am sorry if anyone thought I was doing so.”

What the incident did show was increasing exasperation by bigger brides at the bridal industry’s refusal to respect them – and a groundswell of determination to stop pretending that disrespect is okay.

“It’s one thing if you ask to have yourself photoshopped; it’s a whole other thing if someone takes liberties to quote-unquote ‘fix you’,” said Lauren Chan, a newly engaged size 16 who is a former fashion editor at Glamour magazine.

Chan, like her friend Kelsey Miller, a size 16 newlywed and the author of the 2016 book, Big Girl: How I Gave Up Dieting and Got a Life, was not surprised by what happened to Liepold, but no less horrified. “It’s galling and everybody should be appalled, but it happens every day,” said Miller. “It’s popular to declare yourself ‘body positive’ and accepting of yourself, but the truth is: Bias is still very much out there.”

Especially, she said, in the bridal business.

“Everything in the bridal world is two sizes smaller than in the real world and seven times more expensive.”

Brides-to-be like Liepold and Chan are refusing to play along, and finding ways to bypass what Miller called “the whole subsection of the bridal industry that is completely devoted to weight loss”.

Instead of shelling out for bridal boot camp or sweating for the wedding videos, they are cleansing their social media accounts of images that make them feel unlovely; exercising for “the joy of movement,” as Bevin Bralandingham, a bride-to-be in Los Angeles who teaches a class called “Fat Kid Dance Party,” said; and signing on to online bridal forums that better represent their body types.

And they are far from alone.

Shannelle Armstrong-Fowler, the 6ft, size 16 owner of Haute & Co Bridal Boutique in Chicago, makes her living outfitting and styling brides sizes 14 to 32. Since opening the shop in 2013 after her own trials with finding a dress for her 2012 wedding, Armstrong-Fowler, also the star of the PeopleTV series, The Perfect Fit, has familiarised more than 400 plus-size brides with her sassy catchphrase: “Style, snatch and slay.”

“The style part is finding each bride her perfect gown,” she explained. “Snatch means altering each dress to hug and accentuate all the right curves. And slay is ensuring each bride looks fierce and is ready to make the aisle her own personal runway.”

The path to slaying does not include steering brides toward gyms and personal trainers so a dress will fit better, or insisting on an A-line silhouette, the style most often thrust at bigger brides. Instead, it usually involves finding the right undergarments. Also letting discriminating designers know they should take notice because business is booming.

“A lot of the discord in this business comes from designers who won’t design above a certain size,” Armstrong-Fowler said. “I’ve had this conversation with a lot of designers: I say, if you’re not designing above a 14 or 16, you’re leaving behind an enormous part of the marketplace.”

That includes brides like 27-year-old Chan, who said the gowns she found in her size when she started shopping for her wedding skewed “young and poofy”.

She described a scenario familiar to many curvy brides deflated by the trying-on process. “I had been through Pinterest and all that fun stuff you do when you get engaged,” she said. “I would find a gown I loved on a size 6 model, and when I would go to a store to look for it there was nothing anywhere near my size to try on.”

After settling on a dress she saw online, she emailed the designer asking for customisation in her size. “I said, instead of a beaded top I want just a chiffon top. And they stopped answering me. I must have emailed 10 times.”

Miller, (34), recalls being wrenched into a size 6 before her 2017 wedding to get a sense of how the gown might look. “I couldn’t put my arms down,” she said.

Besides being demoralizing, the lack of inclusivity at bridal boutiques is mystifying, Chan said, because it’s bad business. “This is a time when the consumer is spending more money than she’ll ever spend in her life on a piece of clothing. So why aren’t these brands giving them something to buy?” she asked.