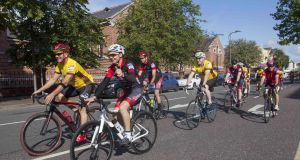 Six months after her daughter Katie was born, Debbie Dillon made what later emerged to be a life-changing phone call.

It had come as a shock when doctors told the Tralee-based structural engineer and her husband, Noel, that their third daughter had Down syndrome but, as Debbie recalls, the couple were very relieved to be assured that their newborn was healthy and had no medical complications.

“I had brought my other children to parent and toddler groups,” says Debbie (44), now a mother of four girls aged between nine and three.

Everything Katie does takes hard work and effort, and
I don’t think people realise how difficult it is for a child
with Down syndrome

When Katie was a few months old, Debbie, who gave up her full-time job to care for her new baby, contacted Down Syndrome Kerry to inquire about the availability of a group catering for little ones with the condition.

Happily the organisation had a thriving group in Killarney, about 30 minutes’ drive from the family home, and Debbie and Katie joined.

This group not only provided Debbie with a much-needed opportunity to meet other mothers and seek their advice on important issues such as State allowances, but through it, little Katie learned about the availability of a whole raft of crucial activities organised by Down Syndrome Kerry: “I was able to find out what supports were available for a child with disability, for example, as well as finding out about the therapies that were available to Katie through Down Syndrome Kerry,” Debbie says.

Katie began attending fortnightly sessions of speech therapy and received important assistance with issues such as feeding, swallowing and speech – all of which, Debbie explains, tend to be affected in children with Down syndrome because of the poor muscle tone which accompanies the condition.

The organisation also subsidised the cost of private swimming lessons for the little girl. “Swimming is a form of physiotherapy and builds muscle tone,” Debbie explains, adding that this support is crucial, as one of the biggest issues for parents of children with Down syndrome is the effort that goes into meeting normal childhood developmental milestones: “Everything is an effort. If you have poor muscle tone, even walking is an issue because of your poor balance.

“Everything Katie does takes hard work and effort, and I don’t think people realise how difficult it is for a child with Down syndrome. Poor muscle tone affects speech, hearing, sight, mobility, your heart and your lungs for example, so the work that has to be done to reach any milestone is massive. It’s really important to have the support of Down Syndrome Kerry, because the same level of support is not available from the HSE.”

However, as the Dillons discovered, Down Syndrome Kerry works with the entire family. Debbie and Noel get to meet other parents, while Katie’s siblings regularly interact with the siblings of other children with Down syndrome. “It’s not just about the child or the adult with Down syndrome, it’s about supporting the whole family,” Debbie explains.

There is a grieving process and we all go through it at some point, so it’s great to be able to talk to someone who has been there and come out the other end

Like the other five Munster branches of Down Syndrome Ireland (DSI), the work of the Kerry branch is directly supported by the annual Tour de Munster charity cycle.

Since the Munster branches of Down Syndrome Ireland became the main beneficiary of the Tour de Munster in 2010, the event has raised almost €3 million specifically for their activities.

This week, cyclists take to their saddles once again to raise money for the six Munster centres. The Tour’s 2020 event begins Thursday, August 6th, featuring cycling legend Sean Kelly. Participants will travel 600km over four days across the six counties of Munster, raising funds for and promoting greater awareness of these organisations and a number of individual beneficiaries.

This year’s cycle is more important than ever. As a result of the pandemic, the Munster branches of DSI have seen the majority of fundraising events cancelled, on top of which they now face increased costs as they prepare to reopen.

“The Tour de Munster is absolutely critical to maintain the services. Funding from the event goes to the six Munster branches of DSI,” explains Debbie, who says DSI also provides a wide range of services for older children and adults in the Munster region, all of which are funded by the cycle.

Now aged six, Katie continues to avail of a wide range of supports from the organisation: “We’d be lost without Down Syndrome Kerry,” Debbie says simply. In 2016, a need arose for a similar group in Tralee. Debbie got together with another mother and set up a toddler group for children with Down syndrome in the Tralee area.

“We work with children from six months of age to six years. Katie is still attending the group,” Debbie says, adding that the dozen or so members enjoy everything from music and art therapy to yoga.

Debbie is also deeply involved with Parent Link, a support service and offshoot of the Munster branches of Down Syndrome Ireland. Parent Link offers support to new parents of children with Down syndrome, offering specially trained volunteer parents who can help with everything from providing information on supports, to talking through concerns you may have about your child.

“Simply call your local branch of DSI and you’ll be put in touch with the Parent Link co-ordinator. A person will meet you or chat with you over the phone and be available for support.

“It’s about signposting parents to help, and helping them find their way to the right supports in a variety of areas. And if somebody just wants a listening ear, Parent Link can provide someone with experience.”

Remember, she advises, “It’s a traumatic experience to get a diagnosis, because you can feel the child who is born is not the child who is expected. There is a grieving process and we all go through it at some point, so it’s great to be able to talk to someone who has been there and come out the other end.”