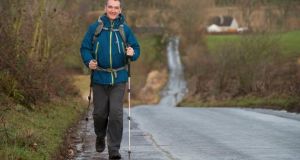 John MacPhee: He puts on the headphones and listens to the beats for 10 minutes, and that gets him up and mobile. Photograph: Alan Richardson Photography

At 46 John MacPhee says the only knowledge of Parkinson’s disease he had was of celebrities such as Michael J Fox and Muhammad Ali. “I thought it was something old people got.” The first indication he had that there was anything up with his own body was when he had difficulty picking up a fork.

“Now and again the arm would shake on one side, so you think it must be a trapped nerve.” MacPhee had always been sporty and in good shape so when the shake started to get more regular he went to the GP.

“That started a round of scans, the Sherlock Holmes approach,” he says. “They only rule out various conditions. The only provable test for Parkinson’s is an autopsy,” he says.

“You go through various phases. Initially it’s the fear of the unknown, then you get belligerent, thinking, I am not going to let this affect me, and then you get real and think, What am I going to do about it? Parkinson’s won’t kill you, it just makes you less of yourself. You are more prone to depression and, at one point in my head, something clicked and I thought if this is a degenerative disease then today is my best day, so I live for today.”

When he was in London for tests initially he undertook an exercise walking to a metronome: a ticking beat that anyone who has studied the piano will know all about. This is a diagnostic and treatment tool that is backed by 40 years of research. He used the metronome beats with and without drugs initially, to assist with his walking and to rule out Parkinson’s.

“The beat triggers a response in your nerves.”

“Basically, it is soundwave technology that improves mobility and independence of people with the condition,” says Clancy.

“It is an auditory cue that overcomes the symptoms of Parkinson’s. Freezing gait – not being able to walk, just being stuck on the spot – is typical.

“People’s symptoms vary from day to day so we needed to be able to test a patient’s mobility on a daily basis and tailor their beats to their needs on that particular day,” she says.

The app took two years to develop and MacPhee is one of the early adapters to it. “It’s like oil in my joints and gets me going in the morning. It has to be prescribed but is available on iTunes,” he says.

“They can click on the app and it looks as if the person is just listening to music. It is non-intrusive deep brain stimulation through the auditory canal. The pulses allow them to walk.”

The app is holistic and gives medication reminders, and can provide symptom management reports to the patient’s doctor.

MacPhee says he pops on the headphones and listens to the beats for 10 minutes, and that gets him up and mobile. “Sometimes I have a top-up in the afternoon and I have now started to enjoy walking again. The focus of the walk used to be all about the effort of movement. Instead I am back enjoying seeing what the dog finds and listening to the birds and the bees.”

One of Clancy’s motivations in developing the app was to be able to help more people live independently and with peace of mind so that they can do simple things without freezing.

“Working in a hospital as a physio, we can help only the people who come into us and only for that day. When we developed the app, my goals were to make this treatment more widely available and to give control back to patients. I also wanted to create jobs and develop a business.”

MacPhee says the beauty of the app is its simplicity. “Just one push to open, one click to start, one to continue: it’s not onerous. Every day you have a different rhythm. Using it has made my walking smoother.”