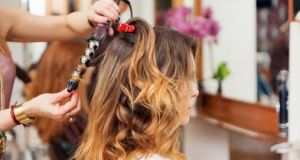 The Irish Hairdressers Federation says the Covid-related closures between March and June have shown the important role of local hairdressers in Irish society. Photograph: Getty Images

An umbrella group representing hundreds of hairdressers across the State has called for the VAT rate applied to the sector to be reduced to 5 per cent .

It has also called for subsidies for trainees to be introduced as part of measures aimed at generating “local economic activity and sustaining employment”.

As part of its pre-budget submission the Irish Hairdressers Federation said supports for the “fragile sector” were needed as it “struggles to recover from the effects of Covid-19, with decreased demand, higher costs and reduced salon capacity”.

It said the abolition of training rates had made taking on new recruits “excessively expensive for salons, costing up to €5,000 per trainee per year more than it had previously done”.

The federation said the enforced Covid-19-related closures between March and June had shown what an important part of the fabric of Irish society local hairdressers were, and it said more supports were needed to ensure hundreds of salons survive.

It called for the introduction of the national hairdressing apprenticeship to be fast-tracked “to provide a nationally-recognised professional qualification and help salons employ young people who want a career in hairdressing”.

Federation president Danielle Kennedy said its pre-budget submission, which is being delivered to the Department of Finance this Monday morning, was “a laser-focused stimulus and support package” which had been fully costed and “would deliver much-needed support for thousands of struggling salons across the country”.

She said the submission had already received “a great response” from officials in Government, and added that she was looking “forward to working with them constructively in the days and weeks ahead”.

“As a sector we were struggling with severe job losses before the pandemic and we are appealing to Minister [for Finance Paschal] Donohoe to engage with us and consider our submission. Its not just about hairdressers, its about supporting local communities all across Ireland to get back on their feet.’’