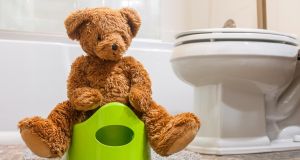 Question: My son is two years and eight months old and we are making slow progress with toilet training. He knows when he needs to go but the problem is he is often too lazy to be bothered going to either the potty or toilet and asks for either his nappy to be put back on so he can play without being interrupted. He has also never done a poo in the toilet, only wees.

I tried pushing the issue about four months ago and it just resulted in him getting upset and becoming constipated. I don’t want to make a big deal of it as he is very stubborn and he might just refuse to take his nappy off altogether – but at the same time I don’t feel the soft approach is working. Any advice on how to overcome these issues? I need to get him trained before his third birthday.

I should also mention he will sit on the toilet (and then reluctantly) only when he has his toilet training seat on it, which makes him not want to go on any other toilet. This means that when we are out of the house we are very stuck.

We would be very grateful for any advice!

Answer: While there is lots of pressure to get children fully toilet trained by their third birthday, the truth is that many children are simply not developmentally ready to reach this goal. Some of this pressure comes from preschools who say children should not be wearing nappies when they start to attend, despite this being unrealistic for many three-year-olds.

A lot of the pressure comes from making comparisons with other children who might have learned to use the toilet in their second year and then assuming that all children can do this. There is a big age range in what is normal in toilet training, with some children being able to grasp the process early in their second year and others not able until halfway into their third year. In addition, many of the children who have toilet trained early are in fact not fully trained and are prone to later accidents and setbacks.

In reality, toilet training takes time and lots of patience. Young children have to learn a lot to grasp the complicated bodily process of understanding a bowel motion, and then being able to notice it coming in advance so they can then control it and do it in the toilet. As you have discovered, rushing the process or adding parental pressure can easily backfire.

To let go and poo, you need to be fully relaxed. Under pressure, a child can easily tense up and hold on to their poos, which results in them becoming constipated. If the habit of ‘holding on’ becomes a pattern, then chronic constipation can set in, which can result in ongoing accidents and loss of bowel control as the child gets older. In my work as a mental health professional I have come across many children suffering from constipation with ongoing toileting accidents resulting from too early, pressured toilet training.

In addition, young children tend to have strong feelings/rituals about when and where they can use a toilet when they are learning. Starting out, most feel comfortable and relaxed enough to ‘do a poo’ only when they are in their nappy. Others will develop a strong preference for a certain potty or toilet seat and will use one of these only at the beginning. This is all very normal and the best approach is to accept their rituals and preferences and to expand out on these only gradually as they become more comfortable with the whole process.

The first step to help your son is to remove all the pressure to get him to use the toilet. Sometimes taking a break completely from toilet training for a few weeks is the best approach, especially if it feels like a battle. The next step is to ‘tune in’ and notice precisely what stage he is at in the toilet training process. For example, the fact that he asks for a nappy means that he is beginning to notice when a poo is coming. It also means that he seems most comfortable doing a poo when he is wearing a nappy.

When he goes through this process, it is important to praise him without any pressure. For example, you might say ‘Oh you know a poo is coming – good boy’ and then give him the nappy, praising him when finished – ‘Good boy, you let the poo out’. The praise is crucial to helping him relax and prevent him ‘holding’ as well as reinforcing his learning.

The next step is to get him comfortable with doing a poo in the toilet. To do this, you want to make being in the toilet appealing and relaxing for him. Some parents I have worked with do this by putting stickers up, playing music and ensuring the toilet seat is comfortable and secure (lots of young children have a fear of falling in). You can also make it rewarding for him to sit on the toilet seat by playing fun games that are played only when he is sitting – blowing bubbles is one of the best ones as the blowing motion relaxes the bowels.

Once he is comfortable, the next step is to develop a routine about when he sits on the toilet – for example, you might sit with him twice a day just after breakfast and dinner. The goal is for him to sit for five minutes to see if a poo comes, without any pressure if nothing happens, while making the process enjoyable by reading or playing games. Once he manages to do a poo in the toilet you can make a big deal of it , praising his success and putting a big star on a chart, etc.

The key to successful toilet training is to be patient and positive, using a gradual approach and always going at your child’s pace.