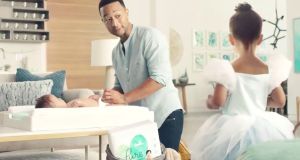 Stinky Booty Duty: John Legend in one of his family’s Pampers ads, with his son, Miles, and daughter, Luna

#SquatforChange might just have scored a big victory. Haven’t heard of the movement? It began on social media last year, when an American father posted a photograph of himself squatting awkwardly against a restroom wall, his young son across his lap, in order to change his nappy. “What’s the deal with not having changing tables in men’s bathroom as if we don’t exist!” wrote Donte Palmer, whose post racked up almost 10,000 likes.

Now the nappy company Pampers has said it will install 5,000 changing tables in men’s restrooms at parks, recreation centres, community centres and libraries across North America by the end of 2021, with the first 500 due for completion in the coming weeks. Pampers says it found that nine out of 10 dads had gone into a public restroom that had not had a baby-changing table.

This is a serious post!!! What’s the deal with not having changing tables in men’s bathroom as if we don’t exist!! #FLM #fatherslivesmatter clearly we do this often because look how comfortable my son is. It’s routine to him!!!! Let’s fix this problem! I Kaepernick drop a knee to this issue! @theshaderoom let’s show the innovation of fathers! #squatforchange

Yup, changing babies on your jacket on a sink in a public toilet is a risky business

To give its initiative a boost, the company has recruited John Legend to join its Love the Change campaign. “Daddy diaper duty is a real thing,” the singer says. “Daddies should be involved, and overall we should be involved in the parenting responsibilities as much as we can. It’s time for society to say it’s time to change this kind of thing.”

Legend is one of the stars of the Stinky Booty Duty online ads that Pamper has made for the last two Super Bowls. “Somebody’s got a stinky booty. Her name is Luna and she made a poopy,” he sang in the first ad, from 2018, as he changed his daughter’s nappy. This year it was his son, Miles, who took on the modelling duties. And as Legend’s wife, the model Chrissy Teigen, also appeared in the ads, it meant the whole family had starred in the somewhat saccharine videos, which quickly went viral.

Other celebrity dads have responded to the push for better restroom facilities. “Yup, changing babies on your jacket on a sink in a public toilet is a risky business,” tweeted the actor Chris O’Dowd, who has two children, Art and Valentine, with his wife, Dawn  O’Porter.

Electric bikes are all the rage. But are they good exercise and are they safe?
7

The disappearance of Trevor Deely, part 3: living with loss
9