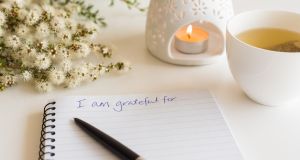 Jen Hogan: ‘I’m grateful to now be able to see friends outdoors once again, even if we can’t hug as before. There is much to be grateful for.’

I’ve always considered myself a “glass half full” type of person. Then a pandemic struck and I haven’t really cared or thought much about whether the glass is half empty or half full.

If it doesn’t contain wine, and come with a side of chocolate, I’m not overly bothered.

Because mostly it’s been a case of keeping the head down and getting through. Riding the rollercoaster and hoping for more ups than downs. And minding the minions and trying to keep them on track.

But then the week’s schoolwork arrived through the Seesaw app. I couldn’t tell you which child’s work exactly because there are too many codes and too many emails and too many log-in details to remember, so everything is a vague recollection and a concerted hope that the right child is doing the right work.

One assignment stood out. “Keep a gratitude diary” the instruction read, detailing how it was helpful in maintaining good mental health. I half scoffed at the notion, as my own personal rollercoaster was in dip mode that day. Any thoughts of living in the now had long since been abandoned as I wished my life and mainly the next few months away. With family living a distance away and so much still unknown and uncertain, there will be no social distanced meet-ups with loved ones for a couple of months yet.

Beginning phase one of easing the restrictions feels great, but I just can’t wait until we’re a few steps further down the line. The children have been wondering what this means for them. Sadly, there will be no seeing cousins or grandparents, but maybe there’ll be the possibility of taking a social-distance-complying walk with a friend for the teens who, in spite of the bad rap their peer group has been getting, have followed the rules to a tee. It’s been months since they saw a soul outside their immediate family, except for the strangers we’ve passed by on our walk.

As I thought of all the things I couldn’t yet do and all the people I couldn’t yet see, I set about the task of encouraging the troops to make a gratitude diary. “We’re so lucky to all be safe and well. It’s easy to overlook that when you’re feeling frustrated,” I coaxed, appreciating that I possibly needed the reminder more than they did.

“Well, I’m grateful that the hairdressers and barbers are closed,” proclaimed the one with the magnificent mane. Hairdressers are Delilah to his Samson. The inability to tackle his untamed tresses bring him joy, and gratitude it appears, and has maybe even resulted in a few less disagreements on the matter.

“I’m grateful for Disney Plus,” said the sixth child “because I love Star Wars”, before scarpering to locate his Kylo Ren costume. The force is strong in him. It’s just a pity it’s the dark side.

Taking it to a more serious level, the middle child declared himself to be grateful for Leo Varadkar. “Imagine if we had Donald Trump – the things he says!” His eyes were wide with the shock that so few of us even feel anymore at the US president’s utterings.

“I’m glad to have people to play with,” volunteered child five, an offering that was not necessarily met with universal approval. “Hmmmm, it’s okay, I suppose,” mumbled one sibling, unconvinced by his brother’s contribution following several early morning rows. But I knew child five meant it. He’s rarely happier than when in his siblings’ company. Having other people around is just a bonus.

The seventh child wandered over, peering from beneath his overgrown curls. “What have you liked doing since Montessori closed?” I asked, knowing the inquisitive one was not to be left out. “The ice-bucket challenge,” he squealed in delight, referring to the challenge which had started up again in his older siblings’ class whatsit groups. “I like to sacrifice my brothers,” he said, laughing, having remained dry himself throughout their ordeals.

It’s been a long and surreal few weeks. I miss people. I miss normality, or at least parts of it. I’m grateful to now be able to see friends outdoors once again, even if we can’t hug as before. There is much to be grateful for.

There always was, we just took so much of it for granted.

The glass is refillable.