‘They won’t listen’: Advice for parents on speaking to young teenagers 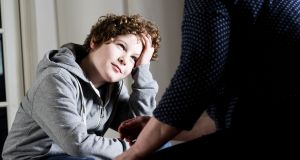 Trust is the key to communicating with 13-year-olds. Photograph: iStock

“They won’t listen,” we parents fume about teenagers, while they rant about how adults “don’t understand”. Both sides are right – and wrong.

Adults desperately want to share some hard-earned insights into life with their offspring. After all, when you see a loved one heading for the very same hole that you had to extricate yourself from once, who wouldn’t want to shout out a warning to try to save them that pain?

Trust is the key to communicating with 13-year-olds


You can take a small child by the hand to guide them away from obvious danger but when you’re letting out the parenting rope as that child hits teenage years, the most you can hope for is that they might hear your voice in their head as they teeter on the precipice.

So, what advice might be worth hearing and lodge in their brain? We ask some experts what they think parents should be telling their 13-year-olds.

What you say and how you say it will all depend on the relationship you have with them and that is something that is built up over time, points out child psychotherapist Colman Noctor. That toddler is already beginning to absorb the family values that they will be living out by the time they are in their teens.

“We completely underestimate that the culture of the family has a huge impact on children and their own value systems. We are just not using it enough.

“If you are saying ‘don’t drink alcohol’, ‘be kind to people’, ‘stand up for yourself’, you have to have been role-modelling that for quite some time beforehand,” he says. It’s not just a speech you make on their 13th birthday.

The problem is, if you are trying to share adult wisdom with a teenager, you are already at a disadvantage because “you don’t understand them and they don’t understand you”. But “we don’t have to get them, we only have to show that we are trying,” says Noctor.

“No 13-year-old has the ideology of a 43-year-old, so you are not going to get them to share your view. But if they can see some merit in it, there will be less resistance to it.”

Teenagers are fabulous but are often self-absorbed beings who have little regard for the advice of their parents, says Aileen Hickie, chief executive officer of Parentline and the mother of five children ranging in age from 13 to 21 years. “I have had only limited and intermittent success with my words of wisdom, but sometimes I am surprised when some of my mantras are repeated back to me by my older children in a positive manner,” she says.

Noctor explains: “Despite the level of disagreement, argument and disruption that they’re causing, some of that stuff is sinking in. Don’t stop saying it just because they are not agreeing with it – through osmosis it is forming their value system. They will never admit that you were right but they will acknowledge it to themselves that you were.”

Trust is the key to communicating with 13-year-olds, says clinical psychologist Paul Gilligan, chief executive officer of St Patrick’s Mental Health Services. “It’s not just about what you say but also about how you say it. Timing and tone are key ingredients. Grounded in love, respect and trust, most advice is listened to,” says Gilligan.

“Whether it’s adhered to or not,” he adds, “this keeps the door open to future communication and dialogue.”

In reality, “the meaning of life” conversations will probably be few and far between amongst the peppering of more mundane observations such as “this is not a hotel”, “your sports kit wouldn’t stink if you took it out of the bag and put it in the wash” and “maybe your friends are allowed to stay out later but I want you home by 10pm”.

However, as Noctor sanguinely points out, “shouting at each other on the top of the landing is not where the decision to change my life happens”.

Normal “street smart” tips, such as “don’t take short cuts through an isolated area”, “don’t sit upstairs alone on a near-empty bus”, or “change train carriages at the next station if you’re being made to feel uncomfortable by another passenger” may seem less relevant now when it’s all about “wear a mask”, “don’t meet up with a crowd” and “wash your hands”. But the over-riding “trust your gut instinct” and “leave a situation if you’re feeling uncomfortable” apply to being out and about – or, indeed, socialising online – with or without the coronavirus around.

Plenty of parents recommend arranging a code word with a teenager that can be spoken in a phone call or texted, to indicate they want you to come and collect them immediately, so they can extricate themselves from an uncomfortable situation, no questions asked. Also point out to them that, when they’re out and about, answering parents’ texts will help keep them off their case even if, as youngsters, they have no empathy for the parental catastrophising that can fill a vacuum.

Personally, any insight I have gained from raising teenagers and writing about them is that supporting their mental health through adolescence is really what matters. Exam results, sporting success, popularity and, certainly a tidy bedroom, mean little in comparison.

Read
– 13 things parents need to tell their 13-year-olds
– Ask questions, then shut up and listen