‘My chance of survival without CPR was about 1%’ 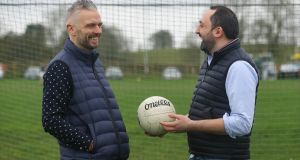 Gerard O’Leary (left) and Diarmuid O’Connell: ‘I’m not medically trained, but it was great to be able to help out a friend,’ says O’Leary. 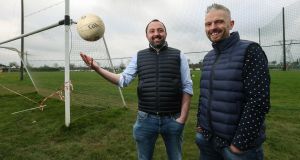 Diarmuid O’Connell and Gerard O’Leary were playing football for their local GAA club in Cork when O’Connell suddenly collapsed on the pitch.

O’Leary noticed immediately that his friend was struggling to catch his breath. “I had done Cardiac Pulmonary Resuscitation (CPR) training 12 months earlier so I started CPR compressions,” explains O’Leary, clearly recounting the incident from 11 years earlier.

Luckily, there was a defibrillator on site, which O’Leary had also received training on. “I hooked him up to the defibrillator and it advised me that he needed a shock so I administered the shock and followed the protocols,” explains O’Leary, who is now the principal at Celbridge Community school, Co Kildare.

Over the next 20 minutes or so – while awaiting the arrival of an ambulance – O’Leary and two other men also trained in CPR continued to give O’Connell compressions. And while O’Connell went in and out of consciousness over the next 24-48 hours, he recovered fully.

“It took me a while before I realised the severity of what happened. I had an undiagnosed heart condition and the chances of my survival – without CPR – out of hospital were about one per cent,” says O’Connell, who is now a secondary school teacher in Coláiste Ide agus Iosef in Abbeyfeale, County Limerick.

Both men have remained close friends.

'I haven’t played football since and I’m advised not to go running but I walk, cycle and can climb a mountain'

“I’m not medically trained, but it was great to be able to help out a friend,” says O’Leary, who continues to do CPR refresher courses every couple of years. Like the staff at many schools throughout Ireland, the teachers at Celbridge Community school are trained to use defibrillator and adminster CPR. Transition year students also usually do CPR courses as part of their TY programme but not this year due to Covid-19 restrictions.

O’Connell is also involved in the Irish Heart Foundation CPR for schools programme at Colaiste Íde agus Iosef and speaks to First Responder groups about his experience. “I haven’t played football since and I’m advised not to go running but I walk, cycle and can climb a mountain,” he explains.

The Irish Heart Foundation (IHF) has been hosting CPR training courses in schools and communities for several years. However, the Covid-19 pandemic has meant that these hands-on courses can’t be held at the moment. So, to highlight the importance of CPR, the IHF has developed a series of videos on how to do CPR and how to use a defibrillator if you find yourself faced with someone who has collapsed, is unresponsive and not breathing.

Compared to other countries, Ireland has a high rate of so-called bystander intervention

“Thousands of people die every year in Ireland from cardiac arrest and about 70 per cent of these happen at home in front of a loved one,” says Brigid Sinnott, Resuscitation Manager at the IHF.

The Irish Heart Foundation launched a series of new videos explaining what to do when faced with a cardiac emergency on Friday, October 16th, international Restart a Heart Day.

Compared to other countries, Ireland has a high rate of so-called bystander intervention, which means that people are willing to do CPR if required. “Also in Ireland, if you call 999 or 112, the operator will talk someone through the steps in CPR and stay on the phone until the emergency services arrive.

“It’s really important for people to realise that they don’t have to be a trained medical professional to perform CPR. Anybody can do it,” explains Sinnott. However, training is important. “People are 10 times more likely to respond and will do better CPR if they have been trained,” says Sinnott.