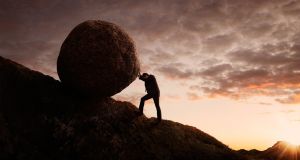 This is part of series on the subject of burnout which continues next week in The Irish Times and on irishtimes.com. We would like to hear from readers who have suffered burnout. What is your experience?  Email us at magazine@irishtimes.com with ‘Burnout’ in the subject line, and include your name, a contact number and your story in less than 300 words.

‘They say no man is an island,” an acquaintance ruefully remarked. “But I’m the exception that proves the rule.”

He was in a state of what we would now describe as “burnout” in his work. He woke each morning fatigued and already feeling down at the prospect of another day. He ended it feeling that he had achieved little. In between, he felt he didn’t have the same empathy as before for the people the organisation was meant to help.

“Maybe I’ve just lost it anyway,” he said of himself. “Maybe it’s me.”

That was another classic sign of burnout – this loss of the sense of belief in oneself.

The organisation for which he worked had allowed his section to run down by not replacing people when they left. Needless to say, the demands remained the same. Again, this is a familiar burnout scenario. Many people working in the health sector have experienced this state of affairs.

What makes burnout hard to cope with is not getting the resources with which to do your job and not getting the support needed to overcome your difficulties. By support I mean effective management that sets about removing the blocks that make good work impossible.

The continuing absence of these resources allows burnout to hit the people affected and can lead to hopelessness which, in turn, can lead to depression.

When my acquaintance raised the issue of the impossibility of doing a decent job in the circumstances of his department, he was met with vague promises he knew would be forgotten as soon as he shut the manager’s door behind him.

Lots of people work hard without getting burned out.

It’s really that lack of a sense of accomplishment, of too few resources, of too little help, and the emotional exhaustion that comes with all this that combine to produce burnout.

What can be done? Escapism usually doesn’t help. Scrolling through Facebook or playing Candy Crush doesn’t really do a lot to take your mind off your problems.

You can look for choices that would help to improve matters in your workplace and you can use strategies such as mindfulness and developing an optimistic attitude. And all of these can help. But for these to work  you need to get organisational support – and this means you have to have looked for that support.

I mentioned the health services above. If a health service is crumbling or just really badly organised, then all of the psychological strategies in the world can leave you feeling stranded.

Resolving burnout is fundamentally down to organisations ensuring people have the means to get their jobs done and listening to the issues that arise in their work. If you work for a body that couldn’t organise its way out of a paper bag, then you might need to move. Now that the economy is on the up, making that move is a greater possibility than it has been for years.

That’s what the acquaintance I mentioned at the start eventually did. His approaches to his organisation continued to be met with promises that were not kept. It was when he began to doubt himself that family and friends got on his case and urged him to find another job.

He didn’t, as it turned out, have to accept a lower rate of pay in the new job. Though the organisation was smaller, with fewer opportunities for advancement, he relished the support he received in getting things done, as well as the ease of communication with his bosses.

He regained his mental health and energy and his interest in his work. That was a prize worth fighting for.

No man or woman is an island. That is hugely important for employers to remember if burnout is an issue in their workplaces. Sending people off to be fixed won’t work if the environment they enter every day is demoralising, unsupportive and impossibly demanding.