‘One nurse made me feel ashamed, a second one offered me a cup of tea’ 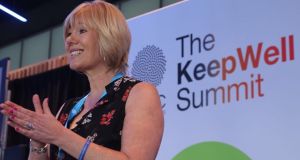 Caroline McGuigan, founder of Suicide or Survive: “It is important for everyone to realise that where there is life, there is hope.”

There was a time when few would dare to admit they had mental health difficulties.

Thankfully, times have changed and these days, people are encouraged to talk about mental health issues, celebrities are openly discussing their own problems, and many organisations are available, day and night, to help people in distress.

But while all of these support groups are hugely welcome, having first-hand experience of what it feels to hit rock bottom can make all the difference when it comes to understanding what someone might be going through.

More than two decades ago, Caroline McGuigan reached the point of apparent no return. Her feelings of despair were categorised as depression and she was duly given medication to help her deal with the daily turmoil. “When I was in my mid-20s, I started struggling with how I was feeling and could see nothing positive in my life,” she says. “I went to the doctor with the mindset of ‘I’m broken, please fix me’ and was put on a course of 16 tablets a day. Even then, I knew that was an awful lot of medicine to be reliant on, but there wasn’t any other treatment available.

“I waited to be fixed, but, although I was numbed most of the time, there were days when I had anxiety which was off the Richter scale. I kept thinking something terrible was going to happen to me and never felt safe anywhere – it was awful.”

But the Dublin woman didn’t want to be on medication for life, so went back to her GP to see if there was anything else which could be done and it was suggested that she see a psychiatrist. “My initial reaction to that suggestion was ‘not in a million years’,” she admits. “I was quite untouchable at the time as I didn’t want people to know so I would hide myself away. But eventually I agreed to go to see a psychiatrist who told me that I needed to be admitted for a short time. This was really distressing as you never imagine you will arrive at a place where your whole world is falling apart. I spent a short time in hospital but eight years as a psychiatric outpatient, taking medication all the time.”

During this time, things took a turn for the worse and Caroline, who is married to John and has two children, reached what she believed was the end of the road and tried to take her own life. “Previously I had millions of thoughts about death but never worried about them because I would never have acted on them,” she says. “But then I reached the point that I was so tired of fighting everything all the time and I figured that John would be better off without me. I wasn’t offered any therapy or anything other than medication so I thought the only way I could kill off the feelings inside my head, was suicide.

“I had reached what I thought was the end and attempted to take my own life. I was rushed to hospital where I flat-lined – died on the bed – they didn’t know if they would be able to get me back. But eventually I returned to life.

“I will never forget the difference in care afterwards – one nurse made me feel ashamed and said everyone around me was struggling to stay alive. A second one offered me a cup of tea – it’s not hard to imagine which one I was drawn to.”

Medics wanted to readmit Caroline to a psychiatric ward, but her husband refused to sign her in and took her home, where slowly and painfully she began to rebuild her life and made a vow to give every bit of strength she had to understanding her mental health issues and in turn, to do something about helping others in the same situation.

“Once I got out of hospital it took a long time to build my life up again,” she says. “I was in a horrible place for a while as people don’t know what to say to you – everyone is different in how they react but nothing prepares them for it and while some will judge, others will be wonderfully supportive.

“John was fantastic and I couldn’t have got through it without him. I realised that I needed to concentrate on pulling myself back from the brink where I was holding on by my fingernails. I was still considered high risk but was offered therapy for the first time and slowly I started to respond and also inform myself of the options open to me. And I realised that there was quite a lot that I didn’t agree with.

“In fact, I was angry at the way people were labelled and just prescribed medication. I discovered that I was the expert about my own health and decided to fully immerse myself into researching mental health. After that I spent six years training as a psychotherapist, because I figured that with my first-hand experience and this new knowledge, I could really help others.”

The mother of two says she realised there had to be “another way” of helping people with mental health issues and offered to collaborate with already existing services. “Initially no one was interested in hearing what I had to offer on the subject,” she says. “But I was determined to find a means of helping people. Mental health is messy and there is no such thing as a one-size-fits-all approach, so I decided to set up something myself to offer a different option – and so 15 years ago Suicide or Survive was established at my kitchen table.

“Initially, we had to beg and borrow every cent to help us get started but we slowly built up the organisation by sitting with people and letting them talk about what they were going through, helping them to realise that their mental health wasn’t the only thing that defined them and importantly that they had managed to get to where they were today, so there was nothing stopping them from getting further in life.”

Then, by self-admission, Caroline says she had the “heart part, but needed the head part”, so spent time learning about how business works and how to run an organisation. She also got much-needed funding to help her get the support group off the ground and keep it running as the successful concern it is today. But while she and her team have helped countless people to re-evaluate their lives and take control of their mental health, she refuses to take any credit.

“I now have a fabulous team around me – with five full-time and 20 contract staff,” she says. “I’m not saying we have all the answers and I definitely stand on the shoulders of giants, but we are doing our best and I can say hand on heart that every day I give my all to Suicide or Survive (suicideorsurvive.ie).

“We don’t tell people what to do, we make suggestions – as guarantees don’t exist – and remind them of their greatness. We want to highlight that struggling is normal and I feel very privileged to be able to help people to realise this for themselves. We now work with some of the official mental health organisations and together, I believe, we can make a difference – because it is important for everyone to realise that where there is life, there is hope.”

Coronavirus ‘cocooning’: the community wraps a soft blanket around its most vulnerable
7

It's one of Ireland's most important prehistoric sites, but you may not have heard of it
10