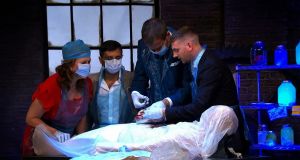 A very unusual event will be coming to Ireland next year when “Anatomy Lab LIVE” hosts its “surgical spin on dinner and dissection” in Belfast, Dublin and Limerick. After dinner, the operating theatre in the room will spring into action. Ventilators, a crash trolley and full team will “race the clock to save a patient’s life”. The show includes spectator involvement, with each table including a surgical trolley with clamps, scalpels and an array of surgeon’s tools. The show, which tours Britain in the first months of 2019, comes to Belfast on March 16th, Dublin on April 7th, and Limerick on April 28th. Standard tickets are £79/€89. See anatomylablive.co.uk

2) The older people’s agency, Age Action, is holding its annual Positive Ageing Week from October 1st-7th. This year’s theme is the 100-year life, with hundreds of events such as walks, quizzes and tea dances held throughout Ireland. Expert talks on positive ageing will be held in Cork and Dublin on Wednesday, October 3rd and in Limerick on Thursday, October 4th. See positiveageingweek.com and ageaction.ie for full details.

3) Babywearing Ireland, a country-wide voluntary organisation, will hold its annual Wear A Hug Fair at the City North Hotel and Conference Centre in Gormanston, Co Meath, on Saturday, October 6th, from 10.30am-5pm. The event is billed as having the largest selection of slings, carriers, babywearing accessories, children’s clothes and natural parenting products on offer in Ireland. The Babywearing Ireland National Sling Library will be on site with a wide variety of slings available to rent by post. Tickets €6.50 from wearahugfair.ie. See also babywearingireland.ie.

4) The Enemy Within – The Spanish Flu in Ireland 1918-19 is a new exhibition at the National Museum of Ireland – Country Life in Turlough Park, Castlebar, Co Mayo. The Spanish Flu claimed 23,000 lives and infected some 800,000 people in Ireland. The exhibition will look at the folk medicines used to treat the condition at a time before antibiotics were discovered. A series of public lectures will be held throughout Ireland. See museum.ie/country-life.

5) The Lexicon Library in Dún Laoghaire, Co Dublin, has become the first place in Ireland to install the Tovertafel dementia care technology. Suitable for use with people with moderate to severe dementia or other disabilities, Tovertafel (magic table in Dutch) projects different games on to a table surface so that individuals sitting around the table can use their hands and arms to respond to light and movement. People living with dementia and their carers can go to the library to join in these games. Plans are afoot to install another Tovertafel in Deansgrange Library. See tovertafel.co.uk/care-innovation-dementia/

6) The Rotunda Hospital on Parnell Square, Dublin 1, will hold a maternity open day on Sunday, October 7th from 10am-4pm. Aimed at prospective parents and pregnant women, events include talks on nutrition and exercise during pregnancy, male and female infertility and taster sessions of pre-natal yoga and hypno-birthing. Admission free but advanced booking advised at eventbrite.ie. Car parking is available in the hospital grounds for €6.

7) Cystic Fibrosis Ireland has renewed its call on the Government for the introduction of presumed consent organ donation legislation – also known as soft opt-out organ donation – to improve transplant rates in Ireland. Ireland lies in 15th place out of the 28 European Union countries when it comes to organ donation, despite high levels of public support. Over a three-year period, after making the change to an opt-out system, Belgium saw its rate of organ donation increase by 100 per cent.

8) Talking to Children about Cancer is the theme of a free public talk by Yvonne O’Meara, medical social worker and psychotherapist on Monday, October 1st at 11am in ARC Cancer Support Centres, 559 South Circular Road, Dublin 8.  O’Meara will provide practical guidelines on communicating with children and adolescents. Tel 01-7078880 or email: amy@arccancersupport.ie if you’re interested in attending.