Natural healing: Restore your health by reconnecting with nature 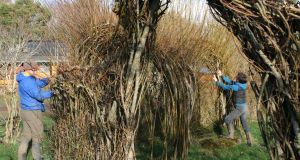 Consider this: when we are at work, our minds are turned on but our bodies are usually sedentary; when we go to the gym, we aim to switch off our minds and furiously exercise our bodies. But are we missing something by not fostering a unified mental and physical contact with nature?

Former solicitor and co-founder of the Nature In Mind initiative, Barry Lee, believes a deep connection with nature is fundamental to human health and wellbeing. With Evan Dwan, he runs “mindfulness in nature” workshops in Dublin city parks and in the Dublin mountains. “We give people light guidance to feel the breeze on their skin, smell the flowers in the Phoenix Park or explore a leaf or pebble with curiosity. People begin to let their guard down and enjoy being outdoors,” says Lee.

In his beautifully written memoir, Nature Cure, English broadcaster and writer Richard Mabey describes how he conquered clinical depression through his re-awakened love of nature. According to Mabey, the idea of a “nature cure” goes back as far as written history. The Roman term “solvitur ambulando” describes how you can work out your physical and emotional issues by walking.

In medieval times, people made long pilgrimages to shrines across Europe and the French philosopher, Michel Foucault, wrote “the country by the gentleness and variety of its landscapes wins melancholics from their single obsession by taking them away from the places that might revive the memory of the sufferings”.

Mabey’s personal experience was that rather than nature taking him out of himself, it was nature seeping into him, firing up his imagination that helped bring him back to health.

Marion Elder and Flor Burke founded Crann Og eco farm in southeast Galway in 2006 to offer people the experience to re-connect with the natural environment.

Set between two ancient Irish woodlands, the small holding has a beautifully woven living willow hedge surrounding a pond, fruit trees and a polytunnel, friendly dogs, sheep and horses, and wooden chalets and tents (with locked phone-charging stations outside) to accommodate visitors. The farm itself is a wonderful example of how humans and nature interact in a holistic way as Elder and Burke teach people the skills to do likewise.

By acknowledging the interconnectedness of life through sensory perception, we can open ourselves to our own inner wisdom,”

Elder leads Back to Nature retreats, bringing people on walks (not hikes) in nature, encouraging them to pause and engage with the trees, plants and mosses in the woodlands. A yoga and meditation teacher, Elder also recently trained as a nature and forest therapy guide, drawing on the Japanese tradition of “forest bathing” to bring people closer to nature.

“Indigenous people have always looked to nature for wisdom and healing. By acknowledging the interconnectedness of life through sensory perception, we can open ourselves to our own inner wisdom,” she says. The ancient Japanese tradition of forest bathing (shinrin yoku) was revived in the 1980s as a therapy for stress-related diseases. Since then, the Japanese and South Korean governments have developed forest therapy centres where people can go and spend time appreciating nature.

“Being in forests allows people to slow down and connect with the natural world, which reduces stress and strengthens the immune system,” says Elder.  The volatile organic compounds (phytoncydes) emitted from forests are anti-bacterial, anti-fungal, anti-viral as well as pleasant to smell.

Dr Caitriona Carlin, an ecologist at NUI Galway, is researching the intrinsic value of the natural environment for health in the Near Health project. “Our study is looking at how through nature and the environment, people can attain and restore health. We are also interested in the interconnections between health promotion and environmental awareness.”

So far, researchers have found that people often identify the health benefits of walking and running outdoors. Carlin says, “others talk about getting their nature fix, feeling calm, de-stressing and feeling restored afterwards”. An earlier study found that connecting with nature makes people feel happy, more restored and motivated to be more active.

In some cases, we are hearing about how nature is literally keeping people alive

The NUIG study has also found that people have affinities to particular natural spots. “Some people have a very strong connection with specific places such as tall old trees or coastal features. Some people talk about needing the silence of being outdoors, and others connect through growing food and gardening. In some cases, we are hearing about how nature is literally keeping people alive,” says Carlin.

Health professionals are waking up to the intrinsic value of spending time in the natural environment. Some GPs are now handing out Blue and Green prescriptions, recommending that their patients spend time in green (forests, parks or mountains) or blue (rivers, canals, lakes, coastline) spaces. But you don’t need a doctor’s prescription to reconnect with nature in your garden, public park or coastal area. Simply leave your phone at home (or turn it to silent), dress appropriately and head for your nearest bit of nature.

Go at different times of the day and in different seasons, noticing the colours, smells and textures of the plants and trees. Observe how nature revitalises itself, sometimes adapting to changes in the immediate environment. Listen to the sounds around you, rather than the latest podcasts and Spotify playlists.

Is it normal for a woman to fart when she orgasms?
9