My Health Experience: Baby steps against all odds

Despite being told their baby would not survive, the Miley family are not giving up 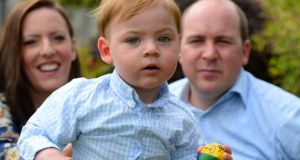 Our baby Jude was born a perfectly healthy, happy baby on July 16th, 2011, despite being nine weeks premature. He was kept in hospital for only five weeks and he pretty much thrived when we brought him home.

However, when he was about five or six months old, Jude started to develop what seemed to be one virus after the other and stopped putting on weight. As a public health nurse myself, I was concerned and I kept bringing him back to his public health nurse. On one particular occasion, our GP thought he might have croup and advised us to bring him to Our Lady’s Children’s Hospital, Crumlin, if we noticed any deterioration.

That night, I noticed his breathing was laboured and his respiratory rate was quite high. We decided to bring Jude into Crumlin where they did a chest X-ray. It showed that his diaphragm was pushing up his lung on the right side and squeezing it to a third of its size, which was why his breathing was affected.

I knew something was wrong all that day. He was making weird noises and crying. I kept calling the doctors and nurses. His stats dropped and his heart stopped; he suffered a cardiac arrest. It took the doctors more than 50 minutes to resuscitate him and, during this time, he was deprived of vital oxygen to his brain which meant he suffered catastrophic brain damage.

Jude had suffered post-surgery complications and was bleeding internally. They put him on an ECMO machine which bypassed his lungs and heart and he was brought down for surgery again. It was nearly midnight before we were able to see him. He was in surgery most of that time and, luckily, they had been able to locate the source of the bleed. It was horrific. He was in ICU for about eight days and he started having seizures. He had an MRI which showed he had a hypoxic brain injury. We were told it was unlikely he would survive.

How did we cope? I really don’t know. What happened still seems like a horrible nightmare. My husband, Greville, was a tower of strength. I fell to pieces but he found incredible strength from somewhere. Our families and friends were unbelievable; they did not leave our sides. The priest who married us, Fr Vincent Twomey, was a huge support and the ICU staff were so caring.

Palliative care
Jude was moved from ICU into a single room to die in peace and the palliative care team was called. The day that his breathing tubes were to be taken out was like a looming execution. The night before, a lovely nurse let us wash him and dress him in his babygro. Until then he had just been in a nappy. We washed him for what we thought could be the last time and played music in his room.

We were all holding our breath around his bedside when the tubes came out but Jude started to breathe and our little fighter has kept going ever since. He is a little miracle. The doctors told us he could die in days, weeks or months. They kept reminding us he had a catastrophic brain injury and not to get our hopes too high, but he kept defying everything they said. He’s one determined little fellow, thank God.

When we brought Jude to Chicago, he could hardly move and was really weak on his left side from where he had been paralysed. His feeding tube had just been removed and he was taking thickened fluids and puréed food.

When we brought him home three months later, the weakness on his left was practically gone and he was crawling properly. He was drinking regular fluids in a sippy cup and eating finger food. All our family remarked on how we had brought back a different child. It was hard work but worth every minute.

Our friends helped us to set up the Jude Miley Trust to raise money for the ongoing specialist care that Jude will need to develop. We have also taken Jude to the Family Hope Center, in Philadelphia, and Brainwave in London, for intervention and assessment. His last assessment at Brainwave showed a marked improvement and we were thrilled that the interventions were obviously working.

Damage as bad as ever
Earlier this year, we brought Jude to the Mayo Clinic for another brain MRI. The neurologist thought that the scan would show scar tissue as opposed to damaged tissue, as Jude was doing so well, but unfortunately the damage was as bad as ever. This was a big blow to us. They recommended that we bring Jude back to Chicago for more intensive rehab so we are heading back there again in September.

Jude was two on July 16th and he is continuing to defy all the odds. We were at home when he walked on his own for the first time, and myself and Grev couldn’t stop crying. After being told he would never, ever walk, to see it before our eyes was so unbelievable and amazing.

His speech is quite delayed and he will be globally developmentally delayed but he is a very affectionate and loving little boy, and he’s always in good humour. Greville gave up work to care for him full-time and is on a carer’s allowance. He is unbelievably patient with him and I think that is what has brought him on so much. Hail, rain or shine, you will see the two of them walking up and down the Dundrum shopping centre; it’s Jude’s gym.

There are huge costs involved in bringing Jude to Chicago: the medical costs for one month alone are about €25,000, but you would go to the ends of the earth for your child. I’m so excited to be going back in September to see what else they will do for Jude.

As a mother, you strive to do your best for your child and we hope we are doing our very best for Jude. We have been so fortunate to have such incredible support from our families and friends in every way – physical, emotional and financial – every step along this journey that we never expected to be taking.

The next fundraising event in aid of the Jude Miley Trust is a family fun run which will take place in Marlay Park on September 15th. Run 4 Jude will be kickstarted by MC Kathryn Thomas at 1pm. To register and donate, go to run4jude.org or call 01-6788878. You can also support Jude at thejudemileytrust.org or mycharity.ie