Is she lonely or simply alone? 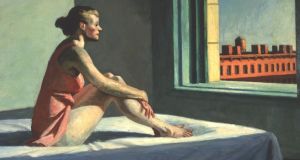 I’m sitting in the window of This Must be the Place waiting for my veggie breakfast on a sun-drenched summer’s morning.

It is chaos here in the wild west of Co Mayo.

There is an epidemic of tourists. Other than me and the woman sitting alone at one of the alfresco tables on the declining pathway outside, under The Clock, the tiny cafe is a clutter of families of all hues and stages of maturity.

“Bet she is a widow,” I whisper to myself. “And he was her golf partner and they went everywhere together with flasks of strong tea and egg salad sandwiches.”

I have to stop myself going out to ask her if I am right. If the ache of heartbreak fades. If becoming a grandmother is enough, because I imagine she has grandchildren and that once a month she goes to visit them on the train.

So while she looks into the middle distance while waiting on her coffee and carrot cake, I earwig the crowded tables. They are talking about paddle-board lessons and Ryanair baggage allowances, the best technique for cracking crab claws and the advantages of tattooed eyebrows while here on my perch in the window seat, I have begun to think about the American artist Edward Hopper.

His series of “window paintings” of solitary women are famous as a study of isolation. Each subject excretes all that is heartbreaking about aloneness. Whether it is Pensive Woman in Pink or Girl in Morning Sunlight, they are unreachable as they sit at a cafe table, on the edge of a bed or behind an office desk.

The brush of the artist has encased them in an “inviolable core of solitude”. Isn’t it a poetically powerful phrase? I carry it with me since I first heard it used by island philosopher Michael Joe O’Malley in a documentary made by filmmaker Bob Quinn back in the 1960s.

Rather random thoughts, you may think. But that is what happens when you live a lot in your own head. But in defence of my ability to think rationally, I do have an old friend who supplemented her meagre student grant by sitting naked for an art student who subsequently became her husband. Surely that has to be the most intimate thing – other than sex – that you could ever experience? Sitting starkers under the gaze of another human being who must become familiar with your every fold and crevice.

Which – albeit circuitously – got me on to the distinction made some months ago by columnist Padraig O’Morain regarding the important difference between “social” loneliness and “emotional” loneliness. His observations were based on the publication of research led by Dr Philip Hyland of Maynooth University, which found that women, in particular, who had experienced childhood trauma were more likely to suffer from emotional loneliness later in life and to not be in a relationship.

So, maybe, one is destined to be lonely and, moreover, that the lonely heart is etched with the scars of those first early experiences. Eye contact by the mother. Skin-to-skin touch. Isn’t it the big new subject among child psychologists and psychiatrists?

On the other hand, there is the wonderful resilience of human beings. That innate ability to reflect and learn, recover and re-invent. Come back from the chasm.

And wow! Am I bloody well wrong about the widow?

Here she is outside the window greeting a young fellow. He must be five years younger than her, at least. And I think there are tongues involved.

Well, you could knock me over into my chickpea white pudding and pesto buffalo tomatoes.