We had no family holiday this year. Here’s what we did instead

I can’t believe the holidays are drawing to a close. I dread the return to normality 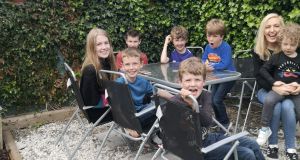 Jen Hogan with all her children at home.

“You get only 18 summers with your children; this is one of them,” or so the meme in its varied forms goes. The essential message is still the same, even if the wording varies slightly – don’t waste a single second of it.

It’s a meme I’ve seen countless times over the summer, and one I’ve vocally responded to as it appeared across my social media feeds. I’ve also found myself answering out loud those who responded with claims that this is nonsense.

“Your children don’t stop being your children just because they turn 18,” one mum argued.

True, of course. Though much as I’d like to believe, this year of all years, that the milestone age makes no difference, I have my doubts.

I can’t believe the school summer holidays are drawing to a close. Though I see much rejoicing on parenting platforms and noted countdowns to D-day complete with picture of mums leaping around the place while depressed-looking children pose with their schoolbags, I’m personally dreading the return to normality.

There’s a certain freedom about summer evenings that are not taken over by afterschool activities. There’s an ability to take a little time out when nights don’t involve the making of 35 school lunches a week, most of which arrive home untouched and covered in yoghurt anyway. And there’s a calm about a summer household that is not infiltrated by the wails and protests of homework despisers - and their children.

A freedom to be and a freedom to enjoy family life. Time, that’s in all too short supply when normality returns.

That’s not to say filling all that summer time has been necessarily easy. We didn’t have a holiday of any description this year. I watched enviously and, if truth be told, with more than a little dash of guilt, as friends and family shared their holiday adventures on Facebook. The meme’s essence and air of urgency ringing in my ears – this is one of the 18 summers.

As my husband took his annual leave from work, I resolved to make some additional summer memories beyond the beach walks, picnics, parks and playgrounds that had thus far filled our days. With my own ready made seven-a-side team, company was never going to be the issue. Finding something that would interest all the ages might. The zoo seemed an obvious solution.

“Would you like a family photo taken?” a smiling photographer asked my husband who was busy counting heads in typical Home Alone style. It’s a necessary requirement that needs frequent repeating on family outings. The scarpering tendencies of the Hogan young in every direction imaginable, particularly in crowded locations, is as certain as sunrise. A quick count to confirm numbers with a sweeping scan to establish we have mostly males is essential. On this occasion we had only males.

I declined the offer before my husband had a chance to reply. “There’s no point,” I explained, reminding him that our daughter wasn’t there. “I wouldn’t display a photo that had someone missing.

“I’ll take lots on my phone, anyway,” I continued before he had the chance to point out the obvious. “We’ll get a full family photo later in the week when we’re all out together.”

There’s a certain pleasure watching your children express wonder and awe at the same things you did as a child. Almost as much pleasure as they get from watching their bird-phobic mother eye up pigeons, crows and herons, suspiciously. As they raced to see the sea lions I was transported back more years than I care to admit, standing in the same place, sporting two plaits and a Mork and Mindy jacket, equally fascinated.

Just as I had, they stood and watched, enthralled by the sea lions’ ducking and diving.

“We need to make a wish,” the second youngest said for no obvious reason. “I wish for a red fedora,” he continued, his random and bizarre request not even causing a raised eyebrow among his siblings. Apparently it gives you special powers.

We strolled and viewed and admired some more. The excitement was contagious as six of my seven watched monkeys swing from treetops and hippos barely surface from the pool. It was one of summer’s almost perfect days. Almost.

And then I remembered.

Eighteen years ago my first baby was born mid-summer, making this one officially her 19th.