Irlen syndrome: looking at the world through tinted spectacles 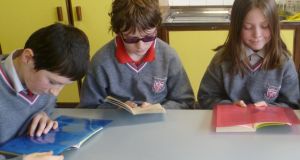 Irlen syndrome is a light-processing problem which results in high levels of “visual noise” and a range of symptoms that may include reading difficulties, migraine, poor depth perception and lack of concentration. It is a condition that affects about five per cent of the population and more than 40 percent of people with dyslexia and dyspraxia.

In 1983, Helen Irlen, a psychologist and educator in California, discovered a particular group of individuals could be assisted through the use of coloured acetate sheets overlaid on reading materials or by the wearing of coloured lenses in glasses. The coloured sheets and lenses work by changing how light is processed in the brain, thus eliminating the distortion that sufferers of Irlen syndrome experience in their everyday lives, in particular when looking at black print on a white background.

Fíona de Buitléir is a resource teacher at Ennis National School, Co Clare. She recently published Dyslexic Brains Learn Differently, a book for children by children, written from the perspective of pupils in her reading class. De Buitléir is a screener for Irlen syndrome and has it herself, though she did not realise it until becoming a screener.

De Buitléir has carried out research in Ennis NS and in St Killian’s NS in Cork (a school for children with severe dyslexia) to see if the statistics tally with international data. She found they do, with 17.5 per cent of the 360 students tested at Ennis NS showing significant symptoms and 37 percent of children at St Killian’s. A striking result of her research was the negative effect of whiteboards in the classroom, with many children reporting physical discomfort such as headache and nausea.

Because colour is effectively different frequencies of light, the lenses change how the brain perceives the information it receives, resulting in positive effects including “an increased ability to read for longer periods, reading with greater fluidity and efficiency, the elimination of headaches, improvement in restlessness and impulsivity and a general feeling of increased comfort”.

When de Buitléir wears her own glasses she finds they cut down on glare from the TV (usually she can see the beams of light coming across the room) and reduce difficulty driving in sunshine and at night. Her feedback from parents and students indicates the coloured lenses result in “greater comfort when reading, increased motivation to read, increased time spent reading, increased speed of reading, less irritability and less need to re-read things”.

One of de Buitléir’s students in Ennis is 12-year-old Jack Byrne, who has dyslexia and dyspraxia as well as Irlen syndrome. Jack’s mother, Dr Cathy Byrne, says that since getting his lenses there has been a marked improvement in his reading. Jack now uses a Kindle and, she says, “devours books at a fantastic rate”. Not only is Jack reading more efficiently but he is more coordinated and experiencing fewer falls.

Jack’s coloured lenses were prescribed by Aislinn Ryan, an Irlen diagnostician or “tint tester” who works closely with Helen Irlen. When a screener such as de Buitléir identifies that a person has Irlen Syndrome, she refers them to Ryan who then identifies the correct colour-tinted lenses out of thousands of possible colour combinations.

Ryan says the syndrome can be either genetic (inherited) or environmental (caused by conditions such as head injury, vertigo, mercury poisoning, post traumatic stress disorder or fibromyalgia). She says that in the visual cortex, the nervous system becomes agitated so you can also have children who suffer from irritable bowel or eczema with Irlen syndrome. While the lenses are not a cure for those conditions, sufferers of Irlen can see their asthma symptoms or eczema improve.

Before testing, Ryan requests that the client get an eye examination to rule out any sight problems. She takes a medical history before conducting the test which includes showing the client material on which there are printed series of lines and boxes, squares and numbers, letter sets and so on, all the while asking the client to describe what they are seeing.

Ryan says that when using the coloured overlays she often sees the person relax – with less frowning, blinking or moving of the page. Clients report the letters are no longer moving, children describe the letters as “having seat belts on”.

After an average of three weeks using the transparent coloured overlay sheets the client returns to Ryan to be prescribed the correct lenses.

“You have to get the tint spot on,” she says. “If you get it right you will see an academic improvement within three or four weeks in a child. The lenses will not eliminate dyslexia but if the child or adult has Irlen syndrome you should see an improvement in reading and in reading flow, in concentration and in the ability to focus.”