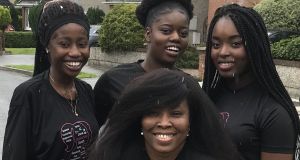 An Irish team has won the top prize at the 2020 virtual Technovation World Summit.

Rachael Akano (16), Margaret Akano (17) and Joy Njekwe (17) – under the mentorship of Evelyn Nomayo, founder of Phase Innovate – pitched their entry, Memory Haven, at the event this week, and on Friday were announced as the winners of the senior girls’ division.

Phase Innovate, a not-for-profit organisation dedicated to bridging the gender and race gap in Stem (science, technology, engineering, and mathematics) fields in Ireland, was founded by Nomayo in May, 2018.

Earlier this year, Nomayo – currently a PhD research fellow in Trinity College Dublin – entered six teams into the 2020 Technovation Girls, an annual competition that allows girls to tackle community issues through technology. Four made it to the semi-finals, and one team of three Nigerian-Irish teenage girls secured a place in the senior division finals after creating the Memory Haven app. It was the only team from the European Union to qualify for the senior division finals.

Memory Haven is designed to help people in Ireland whose families have been impacted by dementia. Influenced by research that shows music can comfort people with dementia, the team incorporated a playlist into the app, as well as healthcare features such as alerts, face and voice recognition, and health checks.

For the 2020 competition, 5,400 students from 62 countries created more than 1,500 mobile apps addressing problems ranging from Covid-19 to climate change. Eventually, they were whittled down to just 10 regional winners – five in the senior division and five in the junior division.

In the senior division, the Irish girls were up against Eunomia, by a team from New Zealand, which is a mobile game that teaches about politics; RecycleRight, from the US, an iOS application that helps prevent waste contamination by facilitating and simplifying the recycling process; Goal Shadowing, which pairs children with similar career goals – one from an underserved community with a child who is privileged; and Mappid, from Brazil, a social app which aims to help keep women and the LGBTQ+ community safe from dangerous or uncomfortable situations.

The new rules of house viewing: strict appointments, layers of cleaning, no time-wasters
9