Elaine was pregnant at 22, living at home. She was ‘scared – I didn’t know what I was doing’ 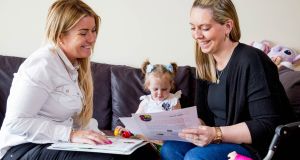 Elaine McCann with her mentor, Sarah Jane Leonard. Elaine was only eight weeks’ pregnant on her first child, Jayden, when she joined the Preparing for Life programme. Photograph: Conor Healy

Parenting mentor Sarah Jane Leonard says that when she was pregnant at age 17 she “would have done anything” to know the information she now gives to families as part of the Preparing for Life programme.

But she has put her first-hand experience to good use. She was one of four mentors in the research phase and is working on the next phase, which involves 150 families.

Sarah Jane, whose son is now 24, did an honours degree in Child and Family Studies at All Hallows College, to learn the theory behind much of what she already knew from the practical side of things.

Of her role as a mentor, she says she would never tell any family what to do; it is about giving them the information and it is up to them whether or not to use it.

The inconsistency of some families in implementing advice could be “frustrating”, she admits. “It was a challenge, but I learned from that, as a mentor, to try a different way.”

Parents find it difficult, for instance, to read to a newborn, the attitude being that small babies can’t do anything. But the good thing about the programme being so long, running as it does over the first five years of a child’s life, is that you can see little changes building a foundation for that child, she says.

We’re talking in the first-floor apartment off the Malahide Road in Coolock of one of the families she worked with. Lone parent Elaine McCann says she still misses Leonard’s fortnightly visits that stopped when her eldest child, Jayden, now aged seven, started school.

Elaine was only eight weeks pregnant when she joined the programme, after a leaflet about it came through the letter-box of her mother’s house. Aged 22 and still living at home, she was “scared – I didn’t know what I was doing”.

Within two weeks, Sarah Jane came out to see her at her mother’s house, which is just around the corner from her current apartment.

“At first I was nervous. Who is this person coming in telling me how to do things? But she made me feel very relaxed,” says Elaine. As a start, Elaine was a “very picky eater” and Sarah Jane focused on encouraging her to try new, healthier things and to cook for herself.

Elaine was also very nervous of the impending birth and she found the tip sheets, a more reader-friendly version of what she was being told on ante-natal visits to the Rotunda, very helpful. Sarah Jane helped her prepare her birth plan and all “went grand”.

“The girls did try to talk me into breastfeeding but I just felt that wasn’t for me,” says Elaine. She couldn’t imagine being able to do it outside the home and also thought “the dad could do something as well”.

From a couple of weeks after the birth, Sarah Jane started bringing her tip sheets about baby development, talking through them and demonstrating techniques. Elaine also went to baby massage classes with Jamie.

“I loved that – it was real bonding with him. I also did tummy time and all that kind of stuff on the floor.” She read and played music to him.

“From a young age you could see him interacting with me – the goos and the gaas. Talking to him, interacting all the time was making him more alert and more aware.”

Jayden is now one of the best readers in his class, likes Irish and maths, and the teachers are “chuffed with him”, says Elaine. She has been to college herself since, studying to become a beautician and massage therapist, “cos I loved doing the baby massage”. Meanwhile, she is getting the chance to apply all she learned on Preparing for Life to Jayden’s sister, Chloe, who is now 18 months.

“She is going to be as clever as him,” says Elaine. Music is her daughter’s big thing whereas her son was more into books.

“Chloe has slotted into Jayden’s routine because obviously he is the older one and in school. But they still have their bedtime routine – bath, pyjamas, bed by half eight – even in the sun,” she says pointing out to the hot June day outside the ceiling-to-floor apartment window, which overlooks a huge expanse of green waste land awaiting the attention of post-recovery developers.

“I can’t believe they’re so good at the moment,” she says. “It’s all down to routine.”