How little exercise can I get away with? One minute it seems...

The case for the one-minute workout is getting stronger, according to new interval training study 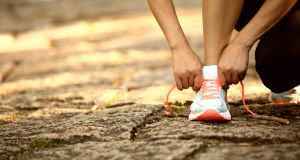 The study found that 60 seconds of arduous exercise was comparable to 2,700 seconds of gentler exercise in terms of physiological effects.

It’s not that I am lazy, I actually enjoy being active. Honestly, I do. Like my colleague Damian Cullen, I have been known to wax lyrical about any fitness exploits (Limerick run anyone?) and am a little hit and miss in my approach but I like being reasonably fit. I see it as being central to my physical and mental health. And, of course, an important element of being able to fit into my jeans.

Despite this, I have often pondered the exercise question: how little can I get away with?

The answer, according to a new study of interval training, may be very, very little.

In an experiment, carried out by scientists at McMaster University in Hamilton, Ontario, one minute of strenuous exertion proved to be as successful at improving health and fitness as 45 minutes of moderate exercise.

That’s 60 seconds of arduous exercise being comparable to 2,700 seconds of gentler exercise in terms of physiological effects.

Interval training, put simply, is a workout that consists of a high tempo but brief burst of exercise followed by light exercise – think of a sprint followed by jogging or resting, then another sprint, more rest, etc.

Athletes use interval training to improve their speed and power, but generally as part of a broader training programme that also includes prolonged, less-intense workouts, such as long runs.

There have been a number of studies into interval training but most have had limits such as not including a control group, not lasting long or not studying both health and fitness results.

Now the Ontario scientists have mounted perhaps the most scientifically rigorous comparison to date of extremely short and more standard workouts, which was published in PLOS One.

They recruited 25 young men, classified as out-of-shape, and measured their current aerobic fitness and their body’s ability to use insulin properly to regulate blood sugar levels. They also biopsied their muscles to examine how well their muscles functioned at a cellular level.

The men were then randomly divided the men into three groups. One group was asked to change nothing about their virtually nonexistent exercise routines – as the controls.

A second group began a typical endurance-workout routine, consisting of riding at a moderate pace on a stationary bicycle for 45 minutes, with a two-minute warm-up and a three-minute cool down.

The final group was assigned interval training, using the most abbreviated workout yet to have shown benefits – the volunteers warmed up for two minutes on stationary bicycles, then pedaled as hard as possible for 20 seconds; rode at a very slow pace for two minutes, went all-out again for 20 seconds; recovered with slow riding for another two minutes; pedaled flat-out for a final 20 seconds; then cooled down for three minutes. The entire workout lasted 10 minutes, with only one minute being strenuous.

Both groups completed three sessions each week for 12 weeks. By the end of the study the endurance group had ridden for 27 hours, while the interval group had ridden for six hours, only 36 minutes of which was strenuous. But when the scientists retested the men’s aerobic fitness, muscles and blood sugar control now, they found that the exercisers had shown virtually identical gains, whether they had completed the long endurance workouts or the short, grueling intervals.

In both groups, endurance had increased by nearly 20 per cent; insulin resistance had improved significantly; and there were significant increases in the number and function of certain microscopic structures in the men’s muscles that are related to energy production and oxygen consumption.

There were no changes in health or fitness evident in the control group.

So, it seems three months of concerted endurance or interval exercise can notably, and almost identically, improve fitness and health.

According to Martin Gibala, the lead researcher: “If you are an elite athlete, then obviously incorporating both endurance and interval training into an overall programme maximises performance,” he said. “But if you are someone, like me, who just wants to boost health and fitness and you don’t have 45 minutes or an hour to work out, our data show that you can get big benefits from even a single minute of intense exercise.”

To sign up for The Irish Times Get Running programmes, go to irishtimes.com/getrunning