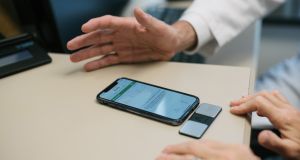 The KardiaMobile app records a medical-grade EKG in 30 seconds after a person places their fingers on the sensors. Photograph: Hannah Yoon/New York Times

A new batch of apps and pocket-size medical devices that work with a smartphone or smartwatch are changing travel for people with serious medical conditions.

The devices allow people with heart conditions, diabetes and epilepsy to discreetly check up on themselves in airport terminals, in train or bus stations, in hotels or even as they travel, sending out information and alerts to doctors and caregivers.

A device is helping cardiac patients such as 40-year-old Nicholas LiVolsi, a graphic designer, who noticed several years ago that his heart kept beating irregularly after flights.

His cardiac electrophysiologist, Dr Daniel Frisch of Thomas Jefferson University Hospital in Philadelphia, recommended an additional monitoring measure beyond the standard electrocardiogram (EKG or ECG), which requires lying on an exam table and having electrodes stuck to his chest, arms and legs to obtain a dozen views of the heart. The device, KardiaMobile, developed by AliveCor, is a personal EKG monitor that looks like a pack of gum and has two sensors.

Patients place the device close to their smartphone, rest their forearms on a flat surface and put two fingers of each hand on separate electrodes. It records a medical-grade EKG in 30 seconds, telling users whether they are in normal rhythm or atrial fibrillation, and stores the results as a PDF on the smartphone.

“You could use it anywhere,” LiVolsi said. “I always carry it with me when I’m away just in case I need it. It’s easy to use and puts all of my EKG readings on the cloud so Frisch can review them when needed.”

The device, he said, “gives me peace of mind”.

The Apple Watch Series 4’s irregular heart rhythm alert and ECG operate with an electrical heart sensor. Users take an ECG by placing a finger on the digital crown for 30 seconds. Electrodes in the crown and in the back crystal work in concert. A user can add symptoms and generate a PDF.

Frisch said the quality of recordings from the Kardia and the latest Apple Watch were very similar and provide a single view of the heart that is “an approximation” of the standard EKG.

Kardia is coming out with a new device, the KardiaMobile 6L, which Frisch said would allow doctors to view the same heart rhythm from six different angles. Users rest the 6L on the bare skin of either their left knee or their ankle and hold it in place with two fingers for 30 seconds.

Diabetics, too, have new devices that can help them monitor their blood sugar.

“The most painful part of diabetes is the finger stick,” said 59-year-old Kathleen Weaver, a dog owner and handler who trains beagles and travels frequently for competitions. She said she used to have to test her blood up to 10 times a day. Now she wears a Dexcom G6 continuous glucose monitor, which doesn’t require drawing blood.

Its sensor remains attached to the skin on her abdomen for up to 10 days, and she also uses an insulin pump. The Dexcom transmits glucose readings every five minutes, and connects wirelessly to a reader device or via an app to her smartphone and smartwatch and sends her alarms when her blood sugar goes high or low. She said the biggest advantage of the Dexcom was not having to “let blood every time you need to go check the numbers, and then it does check the numbers a lot more often”.

Since her medical devices are hidden beneath her clothing, Weaver said, she can be discreet when she wants to know her number. “I can say, ‘Hey, Siri, what’s my blood sugar?’”

Her endocrinologist can see the data stored in the cloud to determine how much insulin she should have throughout the day. Her insulin pump has to be programmed manually. When travelling, Weaver said, she uses an app to message her doctor.

Mary Kate O’Donnell, (29), who has lived with epilepsy for more than a decade, said she worried that the stress of flying would cause a seizure on an aircraft. “No matter how frequently I fly, I have this intense fear of trusting two complete strangers with my safety and simply hoping for the best, which can then cause a seizure during the flight,” she said.

O’Donnell has been using EpiWatch, an app developed by Johns Hopkins Medicine as part of a continuing study to help patients detect and track their seizures, missed medications and other triggers. When a seizure is imminent, patients participate in responsiveness tests and then complete brief surveys afterwards. Seizures are logged as they occur so doctors can review them later. And participants can set the app to automatically contact a designated caregiver when they initially report a seizure or if they fail to respond to an alert from the seizure detector.

O’Donnell said that when she felt the onset of an aura, which can be an unusual feeling or movement that might be a harbinger of a seizure, she checked her heart rate. The higher her rate, the closer she is to having a seizure.

“When I feel my wrist buzz, I know I need to find somewhere to lay down and someone I can tell that will understand,” O’Donnell said. “If not, the app will text my emergency contact for me. That is my solace.” – New York Times