Ask the Expert: I hope this is a phase she is going through but worry it might get worse 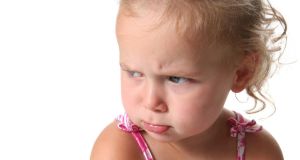 ‘If I say no to my 20-months-old daughter she throws a big tantrum and can hit out.’ Photograph: iStock

My daughter is just 20 months old. She is walking and very mobile and has plenty of words. The problem is she already has quite a temper. If I say “no” to her, she throws a big tantrum and can hit out.

Yesterday, I said “no” when she started to throw her food off the table. She then threw the food in my face and thought it was funny when I started to give out to her. Today, she got so angry when I would not let her in the garden (it was raining) that she charged at me and starting punching. I was really shocked. I can’t believe that someone so small could get so aggressive.

She is nothing like her cousin who I mind three days a week. She is a few months older though a lot calmer and goes along with rules.

I find myself wondering what is the matter with my daughter. I hope this is a phase she is going through but worry it might get worse. She is already a big child physically for her age and she can pack a punch!

What should I do?

When toddlers discover their free will and want their own way, sparks can fly in the home. They feel emotions and desires intensely but have yet to develop the self-regulation and control to manage them. Toddlers will want their demands met immediately and can feel enraged when parents say no to them. This can lead to big “battles of will” and escalating tantrum. While some toddlers might have be more passive and more laid back, some have a more fiery personality which can escalate conflicts. Children who develop early physically can often display the worst tantrums as they are bigger and more mobile yet still lacking emotional maturity.

The first step in helping your daughter is to understand her tantrums as relatively normal for her age. Though they can feel alarming and do require sensitive handling, it will help to understand her tantrums in the context of her being a toddler finding it hard to be out of control. See your job as helping her learn over time to manage her strong feelings. Indeed, you want to channel the positive aspects of her strong-willed personality which will be an asset to her as she grows up.

Though the temptation is to “fight back” with a toddler, getting angry and giving out is counterproductive. If you get angry this will only escalate her anger. If you criticise and give out about her “bad” behaviour, this focuses attention on the behaviour and may inadvertently make her repeat it. Instead, it is important to respond calmly and thoughtfully. A good technique is to take a pause when she throws a tantrum – give yourself a moment to think how best to respond.

Being empathic and naming upset feelings can be really helpful even with very young children. For example, using a warm tone of voice, you might say to your daughter, “You sound cross. I know you want to go out . . . it’s okay.’ Different soothing techniques work for different children. When upset some children require their parents to hug and provide physical reassurance while some need quiet space and time to calm down by themselves. Sometimes different soothing tactics work for the same child depending on the cause of the tantrum. For example, if they are angry due to over-tiredness then a reassuring hug is best, while if they are frustrated and angry they might need a bit of space first.

Focus on yes rather than no

Rather than just saying no to her, (which is like a red flag to a wilful toddler) try to focus on alternatives to yes you can say. For example, rather than saying “No throwing food on the floor” you could say “Keep your food on the plate”. Rather than just saying “No you can’t go out”, tell her what she can do instead – “Let’s play with your Lego . . . that will be fun”. Positive instructions like these focus your daughter on the behaviour you want to see, help you remain calmer and are more effective. If you do have to use a “No”, best to follow this up with a positive instruction – for example, if she hits out you might say “No hitting . . . keep your hands down.”

One of the best techniques with young children is distraction. This means you don’t get hooked into a discussion about their demands and distract them with something else instead. This might mean suggesting they play with an interesting toy or distracting them in a tickling game. It also may mean you change the atmosphere by putting on music or even starting to sing or dance. Different distractions work with different children at different times, so it is important to have a range at your disposal.

Finally, try to anticipate triggers for tantrums or problem situations and come up with a plan in advance for how you will respond. If throwing food at dinner is an issue, why not only give her small pieces of food one at a time. If she does start to throw food, you might withdraw attention and calmly remove her plate for a minute, before you return to feeding. If she starts to hit out, you might firmly say “no hitting” once before withdrawing attention. This way you don’t provide a “reaction” for the behaviour and create space for her to calm down.

No one technique works with every toddler tantrums and the key is to calm, thoughtful and flexible so you have lots of different ways to respond.

– John Sharry is founder of the Parents Plus Charity and an adjunct professor at the UCD School of Psychology. He is author of several parenting books including Positive Parenting and Parenting Teenagers. See solutiontalk.ie for details of courses and articles.

Why talking to strangers is good for you
4

Hilary Fannin: Will you help send these Irish children back to school?
6

What can €120k buy you in Italy, Greece, Cyprus, Lithuania and Louth?
9

Two to savour: A German Riesling and an Austrian Zweigelt, each for less than €8
Real news has value SUBSCRIBE