Go with your gut: eat right and alleviate stress – it’s worth a thought 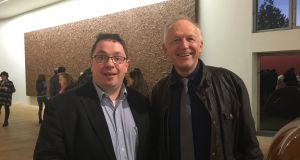 Visual art and science are interlinked at an exhibition entitled Gut Instinct: Art, Food and Feeling, currently showing at UCC’s Glucksman Gallery. The exhibition explores how digestion relates to our mental and emotional states. It is co-curated by Prof John Cryan, head of neuroscience at UCC, who has recently published research at the university’s APC Microbiome Institute which reveals growing evidence that diet can reverse the effects of stress.

“Co-curating this exhibition with Fiona Kearney [director of the Glucksman Gallery] and Chris Clarke [senior curator at the gallery] reminds me that I work in a university,” says Cryan. “I was involved in a ‘music and the brain’ project a few years ago. I like doing these cross-discipline projects and breaking down barriers. Fiona and Chris are the experts when it comes to art, but they allowed me to give them some of the science and ideas that we have around food and mental states.”

Anyone who has ever thought about their “gut feeling” will find something to relate to in the exhibition. “It’s quite accessible. There’s something in it for everyone but also, it really challenges the viewer to look at things in a different way. Scientists like me need to always be challenged. That’s how we make discoveries and breakthroughs.”

The talking point of the Arts Council and Science Foundation Ireland-funded exhibition is a large untitled work which is a piece of chipboard on to which Nutella has been painted. A sweet cloying odour assails visitors to the gallery. It is repulsive but also beautiful in the way the chocolate spread has been applied in sweeping swirls.

Artist Marina Abramovic’s film The Onion shows the artist frantically and tearfully eating a large raw onion against a backdrop of a litany of complaints about modern life. While onions are health-enhancing, Abramovic is clearly disgusted by what she’s guzzling.

“We’re tapping into the idea of foods that can be repulsive but can also be quite beneficial,” says Cryan. His latest research in conjunction with Prof Ted Dinan, head of psychiatry at UCC, shows how bacteria in the gut can play a key role in regulating brain functions, particularly emotional processing and behaviour.

Cryan says that for many years, he and Dinan “have been trying to tease apart the relationship between the gut and the brain”.

It is widely recognised that the gut microbiota – a hugely diverse bacterial ecosystem within the body’s large intestine – plays an important role in health. For Cryan and his team, their research, recently published in the journal Biological Psychiatry, involves looking at different ways to manipulate microbes in the gut “to see if we could modulate brain function in a positive way”.

Prebiotics are non-digestible food ingredients that promote the growth of beneficial microorganisms in the intestines. Two such prebiotics, similar to those found in breast milk and some vegetables, are the soluble fibresfrcuto (FOS) and galacto-oligosaccharides (GOS).

“This opens up a very exciting dietary approach to counter the effects of stress,” says Cryan. “If such robust findings could be translated to humans, we may have a whole new ‘psychobiotic’ way of managing stress-related disorders such as depression and anxiety. Ted Dinan has come up with the term ‘psychobiotic’. We think we’re at the beginning of the psychobiotic revolution where psychobiotics will modulate our microbiome. We’re interested in early life, adolescence and old age. These are times when our microbiome is most vulnerable.”

Describing himself as “very excited” about the research, Cryan points out that it goes back to Hippocrates who said: “Let food by thy medicine.”

“I think we’re beginning to see that we could have a dietary-based way to at least help our brain deal with stress. There’s a whole field of nutritional psychiatry starting to grow. People are beginning to look at ways to deal with the ageing process through diet. We know that dietary components like Omega-3 fatty acids can affect brain function. We just need to do the trial to prove it one way or another.”

There’s ongoing studies on the Mediterranean diet and its effects on depression “that are looking very promising as well. The Mediterranean diet is rich in oils, fibre and is very prebiotic. Prebiotics are present in a lot of vegetables, particularly in Jerusalem artichokes, any type of legumes and grains rich in fibre. We can think about developing dietary interventions based around that or we may be able to develop specific prebiotic-enriched capsules. These are widely used in infant formula. There should be no reason why they couldn’t be added to a diet. They’re easy to synthesise as they are just sugars. FOS is used as a sweetener.”

This year, Cryan hopes to develop a strategy “where we can develop prebiotics in humans and see if we can replicate what we have. I think it’s going to be interesting to see if psychobiotics can be used as an adjunct strategy, especially for those with mild or moderate illness. In the future, we may be able to look at our microbes and follow them up through our health like the way we look at our cholesterol nowadays, modifying it with our food.”

Cryan says it is exciting “to think that gut feeling and gut instincts actually have a real biological basis. It’s in our language all the time. Hippocrates said that all diseases begin in the gut. We tend to compartmentalise things, so that if you’re having a problem with your brain, you go to see a neurologist or a psychiatrist, or a gastroenterologist for gut problems.”

Different disciplines “need to do a lot more talking to each other and come to an understanding, holistically as to how the body works”. Clearly there is plenty of food for thought in Cryan’s research and at the ‘Gut Instinct’ exhibition.