Muriel Slevin has lived with her ill son in hospital since 2014. He is due out but they have nowhere to go 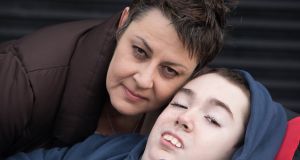 Muriel Slevin and her son Morgan D’Arcy have been living in Our Lady’s Children’s Hospital Crumlin since 2014. Now 16, Morgan is due to be discharged, but they have nowhere to go. Photograph: Tom Honan

Nobody should know the corridors, the entrances and exits, and the names of every ward in Our Lady’s Children’s Hospital Crumlin this well. Muriel Slevin could probably walk these corridors blindfolded, she has spent so much time within these walls in the past four years.

“I’ve become medical,” she admits. “I’m OCD with hygiene. If I catch a cold, Morgan will too.”

Her son, Morgan Darcy (16), is a patient at Crumlin. As Slevin explains it to me, his condition, spinal muscular atrophy type II, is “basically motor neurone disease for kids”.

It’s a rare genetic condition, from which many children do not survive past early childhood. Morgan has surprised everyone, including his mother, by making it to 16.

I didn’t want to have emotions. I wanted my heart to be taken away

Morgan’s room, S3, Our Lady’s Ward, does not look like a normal hospital room, where personal items are usually at a minimum. In this room, there are tall piles of DVDs (Captain Underpants, Despicable Me 3, Groundhog Day), both on the floor, and on ledges; hundreds and hundreds of DVDs.

There are several toys in large boxes, a drone that has yet to be flown, and many books on a windowsill. Piled on his wheelchair are most of his 90 or so neatly ironed and folded T-shirts, all of which have the cartoon characters he loves on them.

There are many toys at the end of his bed; a stuffed dinosaur, giraffe, and fox, plus two plastic chickens that make clucking sounds, and to which is he particularly attached.

It looks like Morgan lives here, and in fact, he has been resident in this room since August 12th, 2014, having been admitted on April 4th of that year. Slevin lives on-site too, in parents’ accommodation attached to the hospital.

They are unusual circumstances. Most children who come to Crumlin as patients do not remain there for years, nor do their parents.

When her son was about 10 months old, Slevin noticed that his eyes were rolling disturbingly in his head. She took him to a doctor, and eventually, the devastating diagnosis of spinal muscular atrophy type II came back.

“I remember feeling I wanted someone to rip my heart out,” she recalls now, on hearing the news. “I didn’t want to have emotions. I wanted my heart to be taken away. For three weeks, I drank coffee and smoked cigarettes, and then I started to cop on. I had to face it.”

At the time, she was living in Germany, with Morgan’s father. She decided to come back to Ireland, where she could navigate the health services in a language she understood. (Morgan’s father has been absent from his life for many years now.)

“I was originally given a prognosis of 18 months,” she says.

To this day, Slevin has no idea what life expectancy Morgan will have, but is sure it will not be extensive. As he is highly prone to infection, should he contract any respiratory infection such as pneumonia, it could be fatal.

“I don’t know where the end is, because infection could always get him. It’s like living with a gun to your head,” is how Slevin describes the lack of any definite prognosis for her son, due to his particular condition. “I have to block out the gun to be able to function.”

In April 2014, Morgan had become so unwell he was admitted to Crumlin, and there he has remained ever since. In the beginning, Slevin kept on their rented apartment in Blanchardstown, but was spending so much time in hospital with her son, and was absent from home for such long periods, that she let it go.

This means she is now effectively homeless. Home currently for Slevin is either in room S3, or the bedroom she occupies in the parents’ accommodation block in the hospital, where she has access to a shared kitchen and bathroom.

Morgan is severely disabled, and has very limited movement. His daily care plan schedule at Crumlin runs to 10 pages. Its headings include: breathing and circulation; suctioning needs; nutrition; urinary and bowel pattern; seizure activity; and mobility and handling.

Such are his needs that to leave hospital which, according to Slevin, he has now been cleared to do so, Morgan will continue to require constant nursing care.

Most children who are patients in Crumlin do not remain there beyond their 16th birthday; they transfer to other hospitals or services over a period of transition. Morgan turned 16 in October, so has already remained there an additional six months.

Our Lady’s Hospital, as is common practice in all hospitals, does not comment on individual cases. However, it did provide the following statement in relation to what generally happens when a patient in their care turns 16, and requires ongoing medical care.

“There is an individual approach to care planning for all existing patients once they reach 16 years of age. Given the complexity of illness and paediatric needs for some children, not all children will transfer home or transition to adult services at 16 years of age. The most suitable location for a child will depend on a child’s individual needs. These patient’s needs are outlined by the hospital’s multi-disciplinary team in order for a suitable place of care to be arranged by the HSE, Tusla or other appropriate healthcare facilities.

“The responsibility for finding an environment suitable to meet the individual needs of a patient requiring a non-acute care setting is the responsibly of the HSE. If the patient is suitable for care in the home setting, this responsibility lies with the parents, supported by the State.”

As Morgan’s case stands now, Slevin has completed her assessment with the HSE for a homecare package, and is awaiting the results. She is hopeful of receiving 24-hour care for Morgan. However, as the family are currently homeless, no potential HSE package can be put in place until a home is found for them.

Due to Morgan’s physical needs, any future home for the two of them needs to be wheelchair-accessible. “I just want us to have a home life again,” she says. “To close the door of our own home and be normal for a few hours.”

Slevin is currently preparing her housing application to SDCC, which will include a number of medical reports for Morgan, to illustrate his needs. As the HSE and SDCC are two different State services, she worries it will take a long time to process the case.

In the meantime, as Morgan is past 16, and been deemed well enough to continue to be cared for in a setting other than Our Lady’s Hospital, Slevin fears he could be transferred to an adult service in another hospital, where there is no parental accommodation. She is with him most days from 7am to late in the evening, and actively participates in his nursing care.

At the end of our time together, I ask when was the last time Slevin did something solely for herself. All our conversation over several hours has centred exclusively on Morgan.

She struggles to think. “Lunch with a friend when it was my birthday,” she eventually comes up with, but it takes the best part of a minute before she can produce that one example. “We are each other’s world,” Slevin says. “Morgan has had me by his side his whole life.”