Folk cures from the Schools’ Collection in UCD

Do you have nightmares? try wild thyme...

Carol Barron, a professor of nursing at DCU, describes a number of Irish folk cures detailed in manuscripts written by some 100,000 schoolchildren from across Ireland in 1937 and 1938. The manuscripts are part of UCD's National Folklore Collection. 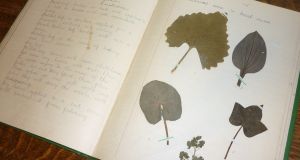 A sample of the Schools’ Collection.

In the Schools’ Collection, 31.5 per cent of cures relate to dermatology. Psoriasis was poorly understood at the time, but there are a significant number of cures for eczema, including the juice of bilberries (collected from Co Westmeath) and the juice from the boiled bark of an elm tree mixed with sugar and drank for a whole year (collected from Co Offaly).

In the main manuscript collection, one cure for eczema, from Co Cork (NFC 315: 85) suggests using two ounces of beeseax mixed with two ounces of pig lard, an ounce of bread soda, the yolk of two eggs and “green oil”. In a time before basic moisturisers such as Silcock’s base, this may have been useful.

Increasingly, science is showing us that many skin conditions, such as psoriasis and eczema, are autoimmune and exacerbated by stress and sugar, so simply rubbing a salve on it won’t easily address the underlying problem.

Other cures from the collection include:

- “Crane’s bill has a purple flower and grows on the sides of walls and ditches in poor soil. It is plucked, cleaned and saved like hay. Then it can be stored and is a wonderful kidney herb. A certain quantity is put into a teapot and a certain amount of boiling water added. Then it is boiled and left stand to simmer for a few hours. It is then strained and cooled and bottle and kept air tight. It can be drank cold or hot in large or small quantities and has been known to cure people dying of kidney trouble.” Volume 406, page 571 Contributed by Mary Kelliher, Lacca East, Co Kerry (http://www.duchas.ie/en/cbes/4613718/4612313)

- “For nightmare, take wild thyme. “Pour one pint of boiling water on one ounce of wild thyme. Sweeten with a loaf of sugar. For those over 12 half a tea cupful is taken three times daily but for children a small quantity will suffice.”

Part of a reserach project by PhD student Fiona Shannon and Helen Sheridan, professor of pharmacology at Trinity College, is investigating if the herbalists mentioned in the National Folklore Collection have passed on their knowledge to family members of friends, and see what has survived and what has changed.

If your relatives collected or gave information on herbal medicine to the collection. Did they take part in the Schools Collection? Your information could be crucial. Contact: Helen Sheridan (hsheridn@tcd.ie) or petemcguire@gmail.com