Tony Hudgell, who suffered near fatal abuse from biological parents, was inspired by Capt Tom 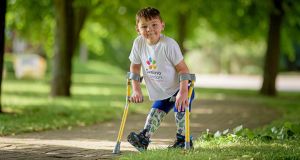 A five-year-old double amputee has raised £1 million, or about €1.1 million, for the London hospital that saved his life by walking 10km on his new prosthetic legs.

The boy, Tony Hudgell, suffered near-fatal abuse from his biological parents when he was a baby that resulted in the amputation of both legs. His adoptive mother, Paula Hudgell, says that he received a set of new limbs in February and, from walking barely a step a month ago, can now power through hundreds of metres every day.

He was inspired by Captain Tom, the former British army officer who raised more than €35 million for the NHS by walking laps of his garden in the days leading up to his 100th birthday.

The fundraising challenge has been “really fun”, Tony says, and although it was hard to begin with, it got easier day by day. He says he felt “really good” to have achieved his goal of walking 10km in June with days to spare. He will make his final charity walk on Tuesday afternoon.

Thank you @davidwalliams for this incredible message to Tony, he keeps playing it over and over. He's sent you one back x💙@BBCBreakfast @EvelinaLondon#GoTonyGo#myhero@BGT#giant pic.twitter.com/qTEnYIcz01

Hudgell says Tony was fighting for his life when she first met him in Evelina London Children’s Hospital when he was four months old. “He’d had all his limbs broken, he’d had blood trauma to the face, sepsis, multi-organ failure, and they never expected him to survive,” she says. “We took him home... He was broken, shut down, a tiny, tiny underweight little boy.”

Hudgell and her husband, who live in Kent, in southeast England, adopted Tony in 2016. “We didn’t want him to go anywhere else. He was our little boy by then,” she says.

Michail Kokkinakis, his consultant orthopaedic surgeon, says Tony’s determination and the support of his family have helped him cope with multiple operations. “I have seen him thriving, I have seen him becoming this very confident and bright young boy he is today,” he says. “He’s a huge inspiration to us all.”

Tony’s initial target of £500, or about €550, has now passed an “absolutely incredible” £1 million, his mum says. She adds that Tony is now fast and confident on his new legs. It is “incredible to think just three and half weeks ago he could barely take a few steps.”

Deciding on his next challenge is a “hard question”, Tony says, but longer term he is set on becoming a policeman. “I want to handcuff bad people and robbers.” – Reuters

Aberdeen to Athens by bike: Homesick student cycles from Scotland to Greece during pandemic
6

Caroline Crowley obituary: A great listener who ‘even saved lives’
7

Cocktails at home: the best mixes and kits to buy
9

A US food writer moved to Ireland. Here’s what he found
Real news has value SUBSCRIBE