Would you walk more if you were paid for your steps?

A fitness app ‘pays’ users to exercise – but is it worth the effort and will it work? 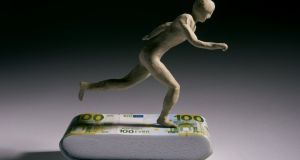 Many deaths in the western world are ascribed to avoidable lifestyle factors, including lack of exercise. Could technology motivate us into exercising more?

A few years ago, writing in the journal Diabetes Spectrum, Dr Deborah Tate and colleagues considered how technology, including mobile phone apps, could be applied to promote physical activity among diabetic patients. They concluded: “. . . high-tech tools hold promise for translating evidence-based components of behavioural interventions into formats that can be disseminated for clinical, community, and individual use by patients with Type 2 diabetes”.

One recent innovation aimed primarily at adults with sedentary lifestyles is described in the British Journal of Sports Medicine earlier this year. The app Sweatcoin records on a smart phone the number of steps taken by an individual and converts this total into a virtual currency: “Sweatcoins can subsequently be used to purchase commercially available products from an in-app marketplace.”

“Considering ways of creating a motivating tool to promote physical activity, we re-thought how loyalty programmes reward users,” Anton Derlyatka – one of the co-founders, along with Oleg Fomenko – tells The Irish Times. “The final touches came when we connected the economic value created by increased levels of physical activity with the idea of a virtual coin.Sweatcoins are already accepted as means of payment by more than 300 ‘vendor partners’ in the US, UK and Europe.”

Dr Mark Elliott – assistant professor at the Institute of Digital Healthcare, Warwick Manufacturing Group, University of Warwick – led a study of 6,000 participants. Results showed an average increase of 19.5 per cent in Sweatcoin users’ step counts over a six-month study period, compared with their average activity three months before using Sweatcoin. Further, the results “suggest that those typically lacking motivation to exercise (sedentary and high body mass index) are most likely to be incentivised to increase their activity levels.”

Commenting on the Sweatcoin concept, Dr Nick Tiller, senior lecturer in Applied Physiology at Sheffield Hallam University, said: “Sweatcoin might facilitate a short-term interest in increasing the daily step-count, but what are the long-term implications of this? By externalising subjective motivation – ie, offering monetary rewards as incentives to physical activity – are we treating the underlying issues associated with poor lifestyle, such as education, time-management, and lack of concern for our own health?”

Tiller, however, acknowledges that the Sweatcoin app will work for some people: “Different people respond to different constructs, and to different incentives; the key is to find what works for you, in the long-term. In my view, anything that gets people exercising and more physically active is a positive.”

As for the study? “A follow-up of six months,” says Tiller, “shows good adherence; but, critically, both papers were written by or involved the Sweatcoin founders; so, more independent research is needed to validate its effects.”

Might some users be more determined to reach specific goals and achieve targets that are convertible to “coins” rather than enjoying physical activity for its own sake? I put this to Anton Derlyatka. “We don’t dispute the fact that the single most powerful way to be more physically active is intrinsic motivation. However,” he adds, “for most people that’s not happening. Despite motivational techniques, such as goal-setting, competition etc, none seems to be working for most of the population, because levels of engagement in physical activity are as high as ever, yet the obesity curve is rising. Sweatcoin provides a motivational platform, which can be used for designing further interventions.”

“I continue to work closely with Sweatcoin,” Dr Elliott says. “Following the above study, we ran a university staff trial where they could access a localised marketplace within the app to buy products from campus-based shops with their Sweatcoins. We’re still analysing the trial results, but meanwhile we’re currently planning a further research project to help us understand the role and value of incentives in motivating people to become more physically active.”

With Sweatcoin a relatively new addition to physical activity promotion through technology, more proof-of-concept data are needed, and reservations remain to be addressed. For example, Tiller says, “It appears that you need to amass several years of consistently high daily steps to redeem meaningful rewards. This might be enough for some very motivated people, and there are smaller more conservative rewards up-for-grabs. I don’t know whether this is sustainable as a long-term solution.”

Derlyatka, however, is optimistic: “It’s now been academically proven that Sweatcoin drives a 20 per cent sustained uplift in physical activity. With more than thirty million installs, Sweatcoin can be used by anyone. Going forward,” he adds, “we want our platform to help policy makers design and implement behaviour change interventions targeted at specific communities and cross-sections of the population.”

With Sweatcoin now in discussions with some councils that are interested in using the app “to make their residents more physically active”, it might be that technology such as this is helping to re-shape the physical activity landscape of the future.

Ross O’Carroll-Kelly: ‘Sold to the man in the Ireland jersey with a bowtie tied around his neck!’
5

Paul Flynn: A family favourite pasta dish and a trick for perfect ravioli
9

What sold for about €500k in Ballsbridge, Dalkey, Sallynoggin and Lismore
10