My function as my child’s emotional safety blanket

You are your child’s safe space, the reassurance that what is happening is perfectly normal 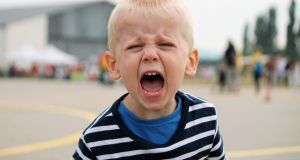 Has your child ever cried, shouted, rolled on the floor and been utterly unco-operative in a public place? Most of us have been in this situation and wondered what on earth we were doing wrong. Photograph: iStock

Picture the scenario: you are picking your child up from the minder/pre-school/creche; you are told they have been in great form all day only to find that you are suddenly confronted with a child who seems possessed. They could be crying, shouting, rolling on the floor and completely unco-operative even though they were the picture of happiness five minutes earlier.

Does this sound familiar?

Most of us have been in this situation at one point or another and wondered what on earth we were doing wrong, or why they took particular exception to us at that point in time even though we are doing what we do on a daily basis.

It raises the question: why do children behave differently (oftentimes worse) for their parents, and particularly for their mother?

I read a piece recently that made me laugh. It was about how children behave 800 per cent worse with their parents than with other people. It was based on a fake study by the department of psychology in the University of Washington and, even though it wasn’t based on real research findings, it made me think about my children and how they sometimes lose the run of themselves when I am in the room. In these situations, I immediately go through the list of what might be wrong – they are tired, hungry, teething or coming down with something – so I can justify why my normally well-behaved children are acting out.

I’m not even sure who I am justifying this to, possibly reassuring myself that I’m not failing as a mother!

Yes, I know this is not true for every parent or every child, but it’s certainly a common occurrence, particularly among younger children who can struggle to make sense of or explain how they feel. It can be a really frustrating situation for parents to be in, especially when there is the added pressure of judgmental looks and that it often happens at the most inopportune times. It is stressful and even mortifying at times, but there is a reason for it.

It seems this phenomenon happens for a number of reasons including overexposure (large volumes of time spent with one parent) or testing of boundaries (as the child learns to navigate through rules and norms around behaviour), but the theory that resonates with me most is that we, as mothers, represent a safe place for our children to express their emotions.

The safe space idea means that we see our children’s emotions in their most raw and natural state, from the biggest belly laughs to the most tearful sobbing, and this serves an important purpose for us and for them. I am not, for a second, suggesting we should be happy playing the role of emotional punch bags for our children or that poor behaviour towards us should always be accepted, but to me the idea that they feel most like themselves around me is, in a way, a reassurance that I am doing something right.

Believe me, I am not always a patient, understanding mammy. When a tirade of emotions ensues, I sometimes get annoyed and raise my voice like everyone else, but I can see how my function as an emotional safety blanket will help my children to grow into more emotionally mature adults capable of processing how they feel and expressing it in a way that allows them to be understood. I am not speaking for everyone here but this idea really makes sense to me.

When I suggested this theory to someone recently, their response was exactly what I expected: that they would quote me on it the next time the kids were wrecking the house in front of visitors. My initial thoughts weren’t far from that either but, the more I thought about it, the more it seems to explain some of the unreasonable behaviour I get to experience that no one else sees.

When children’s emotions are unleashed, it can hit you like a ton of bricks but remembering that you are their safe space can serve as a reassurance that what is happening is perfectly normal and you are not doing anything wrong as a mother. In fact, quite the opposite is true. You are fulfilling an emotional need.

It may not always feel that way (especially when your child is in full meltdown in a public place) but allowing children to be expressive and leaving the lines of communication open can pay dividends during the teenage years, when they feel comfortable expressing their emotions around you and you remain a safe place for any worries or stresses to be shared.

I know this is easier said than done. And if all else fails, remind yourself that it’s not forever.