Take a minute to boost your fitness the easy way

In the sixth part of the series, Rose Costello looks at the quickest and simplest way to get fitter 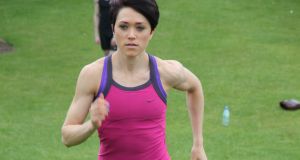 If you think that running for the bus is a waste of time, think again.

Even if you don’t catch that bus, you will be doing a lot more for your fitness than you might realise.

The latest research shows that taking exercise in short bursts could be just what the doctor ordered. It’s known as high-intensity interval training (Hiit) and it is now part of any fitness instructor’s offering. Even those who can’t be bothered to go to a gym or who don’t have the time can benefit.

High-intensity training means really pushing yourself for a short amount of time, resting, then pushing yourself again. What’s shocking is how little time it can take to make a difference to your fitness.

A report published in the PLOS One journal last year followed two groups over 12 weeks: one spent just 10 minutes on training that included intense intervals that added up to one minute; the second group worked out at a moderate, even pace for 45 minutes. The surprise is that the two groups saw similar improvements in health. There are a number of other studies showing equally encouraging results.

Claire Mc Glynn, a competitive weightlifter and personal trainer at cmgfit.com in Dublin, loves to use Hiit and says it is the best and quickest way to achieve positive results in your physical and mental health. “It’s very simple really – everyone knows that when you put 100 per cent of effort into something, you get the best results and there is no exception when it comes to exercise.”

Mc Glynn points out that she can do the same Hiit routine as a beginner, but if they both do it at their top level of intensity, they both benefit dramatically. There is no need for modification of a routine for beginners. They key is to feel that you are pushing past your own comfort.

“They might curse me for asking them to do it,” she says, “but once they’re doing it, the adrenaline kicks in and it’s just a matter of working through the process. Afterwards, endorphins – happy hormones – have been released and they’re tired, yet contented and have an air of accomplishment, and sometimes surprise at what they have been able to achieve.”

The 29-year-old runs hardcore classes in CrossFit353, which involves using heavy weights or pushing around massive tyres for fun. But she also teaches members of the Retired Teachers’ Association of Ireland, who are between 50 and 70.

“Their progress has been unbelievable. Many started with me two years ago and now they are blitzing sessions of many, many squats, lunges, push-ups, plank holds for up to three minutes and so on. Their mobility, strength, fitness, self-belief and confidence has increased tenfold.”

Hiit also boosts your metabolism, ie the rate at which you burn calories, for hours afterwards.

Good form is key on whatever exercise you are doing, she says. “There is no point in repping out 100 squats if your back is rounded and knees are caving in, you’ll just do more harm than good.”

You don’t have to join a class to experience the benefit, however. These are principles you can put into practice every day. This doesn’t mean you should give up on beach walks, rather that you should run after that bus with abandon, for a minute anyway. And regardless of whether you catch it or not, you will have done yourself some good.

The World Health Organisation advises adults do at least 150 minutes of moderate-intensity aerobic physical activity a week or at least 75 minutes of vigorous activity. Incorporating Hiit doesn’t mean slacking off, simply realising that a few sharp bursts can be valuable too.

If you cannot exercise most days, but try to get out at the weekend, take heart. A report last month in the JAMA Internal Medicinejournal shows that “weekend warriors”, who did all their exercise on one or two days of the week, were found to lower their risk of dying from cardiovascular disease by 41 per cent and cancer by 18 per cent, compared with the inactive. Even those who didn’t manage to get the 150 minutes of activity advised by the WHO reduced their risk of early death by one-third.

For those not exercising now, walking quickly can count as “high-intensity” if you push yourself. Even a brisk 20-minute daily walk could reduce your risk of early death, according to research published in the American Journal of Clinical Exercise in 2015. The study of more than 334,000 Europeans found that twice as many deaths may be attributable to a lack of physical activity compared with the number attributable to obesity, but that a modest increase in physical activity could have significant health benefits.

An earlier study in the Lancet in 2012 said that inactivity was killing about as many people as smoking.

If you have been following this series, you should be eating a pretty balanced diet that gives you more energy. Put that energy to good use by adding in some extra exercise – or even just some exercise.

The maxim still holds that you cannot outrun a bad diet, but to be healthy you need to do some exercise too. Using the principles of high-intensity interval training is an easy and effective way to achieve results without putting in too much effort.

Ashley Borden of the Body Foundation in California, who has trained actor Ryan Gosling, says she uses Hiit training because it is efficient, burns fat and builds muscle. There is no need to have any fancy equipment either, just the focus to really go for it for half a minute at a time.

This all comes with a proviso, of course: as with any form of exercise, you need to be in fairly decent shape to get started. If not, or if you are on medication or have any concerns or conditions, check with your doctor first. And wear the appropriate footwear. Then go for it.