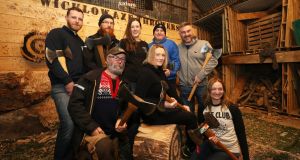 On a wet dark winter’s evening I took the opportunity to join the Wicklow axe throwers on one of their regular practice evenings, held in a barn, on the outskirts of Newtownmountkennedy.

Ashley Glover, one of the founding members of the Wicklow club, pulled me aside to tell me the first rule of axe club ... no, it’s not what you think, they are actually trying to let the world know of their existence. The first rule of axe club is never wander around with your axe unsheathed, unless of course you are in the axe throwing area, your axe must be sheathed at all times.

I mean, no one wants to lose a toe do they?

I had thought that I might be just observing for a while but nope, I was taken straight in to the throwing area, which is separated from the viewing gallery and the warm fire by chicken wire, it reminded me of a pub, I once had no business being in, in the US State of Virginia.

First of all, in my defence, my axe throwing experience consists of chopping kindling and logs out in the back shed as a child but the aim of that is to keep a hold of the axe, it seemed a strange feeling to have let it go. Also this was a double bit axe (blade on each side of the head) so I was full sure I was going to either cut my back when I swung it behind my head or split my head open as I swung the axe back over towards the target. Neither of those things happened and I’ve it on good authority that they can’t happen either.

In fact I’d go as far as to say this sport is 10 times safer than sending your child out to the shed to chop wood.

My instructor was Ceola McGowan, Ireland’s top woman axe thrower and one of the best in the world.

You can’t just be throwing the axe willy-nilly at the target so McGowan took me through the stance then let me loose. Turns out I’m a natural, or at least not the worst beginner ever.

“Generally speaking, the axe will carry itself so when you pull back, and you throw forward and you’re throwing into that kind of arc. The axe, because it’s top heavy and the long handle, will cause rotation on its own. Some people throw with two feet planted right in front of them kind of in a squatting position, sometimes one foot in front of the other. It just depends on your balance and what works for you at that time.

“I think you did fantastically. The fact that on your first throw you got it, it didn’t go into the target, but it went down all the way to the target. That was a fantastic first throw and then you hit the target by your third throw, which was even better again because normally on the guest nights what you’ll see as well as a load of axes everywhere is low scores, and I think you have a score in every section, so excellent.”

She’s referring to a competition that we had in which I was second last. That means I beat a seasoned axe thrower. Admittedly my form was lacking in the end due to my arms getting tired. It’s rather physical, not as physical as I was expecting, the axe I used was a pleasant weight to throw, but it certainly takes it out of your upper body. It is seriously good craic and I’d definitely recommend it for those who would like to build upper body and core strength into their workout.

It’s also a wonderful sport if you would like to compete, make friends and represent your country. Who knew that this country of with little or no lumberjack tradition would turn out to be so good at it?

“This year, I’ve been to Scotland where they didn’t separate the men and the women’s divisions,” explains McGowan, “over all of that I came eighth and there was about 40 throwers there. I went to Sweden and I competed in the worlds I came first in the semi-final and then fourth overall for the women’s category.”

The fun aspect of this sport is definitely on show during my brief experience as the camaraderie in the barn, and the celebrations I received anytime I got near the target, gave me that warm fuzzy feeling that I’d stumbled upon a group of seriously supportive people. My friend, who introduced me to the club, Matthew Wilson has been with the axe throwers for a few of years now.

“It’s like Ashley says, ‘it’s cheaper than therapy’. We all just get together and have a good time, Thursday is often the highlight of everyone’s week and that’s the best thing about it, it’s more than the sport.”

To my surprise I also found out that it was an excellent family activity. Oonagh McMorrow started the sport a few years ago, her husband was one of the founding members of the Wicklow club and it has turned into an activity the whole family can do.

“Our 16- and 12-year-old sons throw double axes and the nine-year-old son throws hatchets and tomahawks. One of the exciting things about axe throwing is it’s opened up a world of travelling to interesting countries and places we’ve never been before. Last year, the family went on a holiday to Nova Scotia to compete in the Canadian Open championships, which was brilliant fun we had just under two weeks over there just literally living in rivers and lakes and canoes and forests and competing in competitions in between.”

If you fancy giving axe throwing a try, there is an indoor axe range in Dublin axeclub.ie or get in touch with Axe Throwing Ireland on Instagram and they will put you in touch with axe throwers near you.

The Covid-19 pandemic is changing the way we speak
7