First steps to top level: How Cora Staunton got to the top of her game

‘The biggest piece of advice I could give to young people ... is it can take a long time to find the sport you love’ 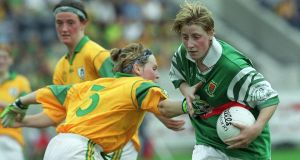 You know Cora Staunton. Or, at least, you think you do. You know the Mayo footballer, the four-time All-Ireland senior football winner and 11-time All Star, who continues to play club football for Carnacon and is in Australia playing in the AFLW [Australian Football League Women’s] for the Greater Western Sydney Giants.

But how did the now 39-year-old first get interested in sport, what obstacles has she faced, did she ever consider giving up, and what advice does she have for others?

How did you get into sport?

“I think sports really started for me when I was about like six or seven when I was in primary school. In Carnacon National School we had a very good principal who was very interested in sports and made sure everyone in the school was playing a lot of sports.

“GAA was obviously the biggest sport but we were lucky enough, our school was attached to a community centre, so we had a very big indoor hall where we used to play a lot of indoor soccer, and we also had a handball alley. We played handball, racquetball, squash, basketball, indoor hockey, volleyball, rounders - we played them all. He made sure we tried lots of different sports.

“A lot of the girls didn’t play sports, whether the opportunities weren’t there, or they just had no interest, so I was the only girl within the school that used to try most of them. Every break and lunchtime I used to be outside playing sports with the boys. Whether we were playing soccer or Gaelic there was always a competition within the school every lunchtime.

“I soon realised I was quite competitive and that I liked winning. There were no girls sports in the community, but my brothers were playing under-8s so I decided I’d go to it even though it was for boys – that’s really how my football career started. I really didn’t start playing any girls sports until I was probably 10 or 11.

“I then had to decide where I was going to secondary school. Obviously, normally, you’d go where your older siblings go, but I didn’t really want to go to that school because they didn’t offer any sport for girls bar volleyball and that wasn’t the sport of my choice. I decided to go to a different school based on the fact they had a very good football team.”

Was there a time in your life you nearly gave up sport and who encouraged you to keep going?

“I’m from a country family. My dad was a farmer, and my mom didn’t work until we got bigger because there are eight of us. They were very supportive, they just let us off to play and get involved in whatever we wanted to be involved in. It was very much a community thing. Whoever was your football coach at the time was probably your neighbour and they used to bring us to a lot of the games. It was how it worked in rural Ireland.

“I really struggled in first year of secondary school because I didn’t really know anyone, I went from a primary school of about 100 kids into a school of 850 and none of my primary school friends went to that school. I found that change all very difficult at the time, but I was so engrossed in sports I was playing on every team I could play on.

“Between first year and transition year my mother got sick with cancer and she died when I was 16. That was the only time I stepped away from sport for a very short period of a couple of months. Not that I didn’t love sport, I was going through a grieving process and I was quite angry at the time. My thoughts were because I was playing so much sport and I was so talented, I was on probably 10 or 12 teams, so I kind of got a bit angry at sport that it robbed me of a lot of time at home and with my mom when she was sick.

“At this stage, I was 16. I had started to play on the Mayo senior team as a 13-year-old, so, in hindsight, I was probably a little bit burned out as well. I was probably trying to keep every side going and then obviously the turmoil of what was going on at home made it difficult.

“People kept calling to the house. They’d call to collect me for training and, even if I wouldn’t go, they kept turning up. And I suppose the more time I spent with them and the more time I spent watching the game, I started to get my mojo back and have the grá for it again. That was the reason I got back to sport, the people that were involved in the teams and my friends. Since I went back, I haven’t stopped since.”

What advice do you have for young people looking to get into sport?

“The biggest piece of advice I could give to young people, whether you’re male or female, is it can take you a long time to find the sport that you love or have a passion for.

You don’t have to play sports at an elite level or very competitive level and sometimes I don’t even like to use just use the words sport, I like to say interest because it doesn’t always have to be sport. You might be involved in dance, or you could be involved in music, or be involved in drama. It can take a long time to find your interest and what you need to keep trying and trying out things and finding out what you like.

“I’m often asked at school talks what my favourite thing is about sport, is it winning in Croke Park? Travelling to Australia? They’re all great things but it’s the people that you meet within sport that are without a shadow of a doubt the biggest reason that we keep continuing to play sport.

“It’s the team-mates, the friends, the coaches, all of these people, they become lifelong friends.”