In study, anti-ageing effects of cycling appeared to extend to immune system 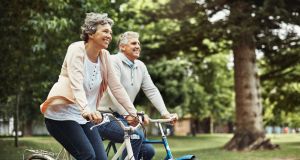 Cycling can hold back the effects of ageing and may rejuvenate the immune system, according to a new study.

Scientists carried out tests on 125 amateur cyclists aged 55 to 79 and compared them with healthy adults from a wide age group who did not exercise regularly.

The findings showed that the cyclists preserved muscle mass and strength with age, while maintaining stable levels of body fat and cholesterol. In men, testosterone levels remained high.

More surprisingly, the anti-ageing effects of cycling appeared to extend to the immune system. An organ called the thymus, which makes immune cells called T-cells normally starts to shrink from the age of 20. But the thymuses of older cyclists were found to be generating as many T-cells as those of young individuals.

Prof Janet Lord, director of the Institute of Inflammation and Ageing at the University of Birmingham, said: “Hippocrates in 400 BC said that exercise is man’s best medicine, but his message has been lost over time and we are an increasingly sedentary society. However, importantly, our findings debunk the assumption that ageing automatically makes us more frail.

“Our research means we now have strong evidence that encouraging people to commit to regular exercise throughout their lives is a viable solution to the problem that we are living longer, but not healthier.”

Male cyclists taking part in the study had to be able to cycle 100km in under 6.5 hours, while women had to cover 60km in 5.5 hours.

“The findings emphasise the fact that the cyclists do not exercise because they are healthy, but that they are healthy because they have been exercising for such a large proportion of their lives,” said Prof Stephen Harridge, director of the Centre of Human & Aerospace Physiological Sciences at King’s College London. “Their bodies have been allowed to age optimally, free from the problems usually caused by inactivity. Remove the activity and their health would likely deteriorate.”

The research is outlined in two papers published in the journal Aging Cell.