Fitness trackers: the good, the bad and the ugly of wearable tech

When it comes to our health, more knowledge may not always be a good thing 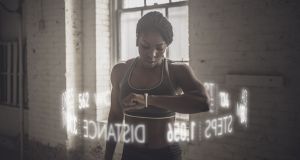 My heart soared when Ireland beat the All-Blacks in rugby in November this year. I don’t just mean that metaphorically – I have the data to prove it.

At 10pm on November 5th, as the Ireland versus New Zealand rugby game entered its final moments, my heart was beating a healthy 66 times per minute. At 10.06pm, as the full-time whistle blew in Chicago, in my sitting room some 5,800 km away, my heartbeat leapt to 121 times per minute. One minute later, it had dropped back to 88.

I know all this because I am the owner of an Apple Watch.

Apple launched its first smartwatch 18 months ago, and already it has become the second highest revenue generating watch in the world, after Rolex. Despite reports of disappointing sales, around 12 million Apple watches are thought to be in circulation worldwide.

One of them has spent the past 12 months on my left wrist, where it has taken up residence as a kind of portable personal assistant-slash-nanny-slash-Star Trek-style phone. It is a notifications centre and a nifty, car-safe GPS device. I can take calls on it when I’m driving, without taking my eyes off the road or my hands off the steering wheel – invariably prompting me to shout: “Look, kids, it’s the future!”

It is a pedometer and a health monitor, nagging me by way of regular, soft vibrations on my wrist to drink water, to stand, to meditate, and to meet my daily calorie and exercise target (170 calories and 30 minutes of daily brisk exercise).

But most of all, it is a shockingly comprehensive health database. Over the past year, while I’ve been going about my business, my watch has quietly been recording details of my steps, my calorific output, my sleep cycles – and all of the moments of heartbreak and happiness. At a glance, should I feel the need, I can find out how many steps I took in the month of April, or my heartrate at, say, 7.36pm on March 13th. It could also record my body temperature, my respiratory rate, my reproductive health, my UV exposure, my willingness to be an organ donor and even my sexual activity.

Currently, one in 10 people in the US owns a health tracker such as a Fitbit or an Apple Watch. According to Google’s 2016 Connected Consumer Survey, 5 per cent of Irish people have a wearable device.

Over the next decade, adoption of these devices will become far more widespread, alongside sensors and apps that can monitor your body for signs of the onset of illness and chronic stress. We may not even need to remember to charge and wear a watch: smart pills are being developed that when swallowed will measure your health from inside your body, transmitting it to the cloud. Contact lenses will monitor us for signs of diabetes. Future generations of Apple Watches, Fitbits, or Android Wear gadgets will detect and mitigate “adverse health events,” such as addiction relapse, according to a recent report published by the MIT Technology Review.

The reason tech companies are pouring so much money into this is not – whatever they might claim – that they are on a mission to save lives, or even to ensure we get our 10,000 steps a day (an entirely arbitrary number, by the way).

Our health data is an increasingly valuable commodity, and – chillingly – a recent report by the Center for Digital Democracy and American University warned that there are almost “no privacy safeguards in place for consumer health data”, with multiple industries are ready and willing to mine it for profit.

Irish users are protected by the more rigorous data protection environment in Europe. According to Rob Corbet of Arthur Cox, writing in a report from November 2015, there is no firm consensus between Europe and the US “on how to apply privacy rules in a manner that strikes the right balance between encouraging product innovation and protecting user security and privacy” as wearable and Internet of Things technologies evolve.

Users in Europe may be asked to specifically consent to the storage of their data – in much the same way as we have to consent to allow cookies to record our movements online. In December, Apple began asking Watch users to opt into anonymous data collection about workouts and activity information.

Internationally, a number of employers and insurers have seized on wearable tech and health apps as a way to encourage healthy choices by workers and – the theory goes – cut down on sick days and insurance costs. In the UK, insurance companies are offering cut-price Apple Watches to customers who sign up to a data monitoring program.

There are studies to suggest that when it comes to our health, more knowledge may not always be a good thing. An article in the British Medical Journal questioned whether the proliferation of health apps now on the market is, in fact, responsible for an increase in patient stress levels.

Wearing a smart watch has certainly made me a bit more hypochondriac: before this year, I don’t think I had ever used the phrase “resting heart rate”. Consultant dietitian Paula Mee, who no longer wears a fitness tracker, says that when she began monitoring her activity with a Jawbone, she found that she was only managing 2,000 to 3,000 steps a day – a finding that was “more dispiriting than motivating”.

“Anything that helps people to move is useful, but I do think we could improve it and help people to use the data in a more meaningful way, to set personal goals for themselves. You might only burn off 200 or 300 carlories, but your muscle mass is developing and your visceral fat is decreasing. so part of the challenge is helping people to understand the benefits of exercise, even when the numbers being recorded on their tracker seem low.”

Dr Deirdre Plant, a Waterford-based GP, agrees that more awareness “can only be a positive thing. Obesity is a huge issue for our generation. For the few people who might obsess about it, this technology will be worth it if it stops many more of us being in denial,” she says.

“We’ll say we walk three times a week, but we’ll forget that this week we didn’t actually manage to walk once. So a fitness tracker, used properly, can be a good tool.”

So has my year of quantified health made me any, well, healthier?

The short answer: probably. Looking over my data, I can see that my exercise level increased over the course of the year, from a daily average of a paltry 16 minutes of brisk exercise in the first six months, up to around 24 minutes in the second half. But that may be more to do with a shift in my lifestyle than a conscious choice: halfway through the year, I moved from car-reliant California home to rural Ireland.

When the vibrations nudge me to have a glass of water or to stand for one minute, I will often obey. And in return for for the small amount of additional worrying I do about my lack of restful sleep – or whether the repository of data I’m unconsciously gathering in my phone’s health app will one day come back to haunt me – I glean a deep, visceral pleasure from seeing my calorie and activity circles complete, or when I set my watch to time a bike ride or a hike.

Unfortunately, the one thing it hasn’t managed to improve is my reprehensible time keeping. That may be beyond even a smartwatch.

10 of the best fitness trackers

Garmin Forerunner 235: There are a range of Garmins at all price points, starting at about ¤99. This one has a full fitness tracker with heartrate monitor and built-in GPS and nine-day battery life. Use Garmin Connect to compete with family and friends. €299; harveynorman.ie

Jawbone UP3: The original activity monitor. Includes a tri-axis accelerometer, as well as skin temperature sensors. Monitors the stages of sleep. €80.99; argos.ie

Misfit Flash A budget band, the Flash tracks steps, sleep, and is good for swimming. Six months battery life. Monitoring hardware can be popped out of the strap and carried in a clip. €29.99; currys.ie

Samsung Gear Fit 2: Samsung has its own app platform, Tizen, instead of Android’s Wear. Has GPS, heartrate monitor and a big, curving screen. Takes a SIM to be a standalone communicator. €239; littlewoods.ie

Prices correct at time of going to press